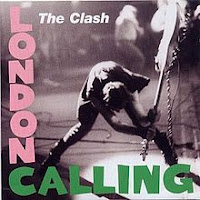 Though it was released during the final two weeks of the 1970’s in the UK, in the US the Clash’s third studio album London Calling came out during the first month of 1980. This double album sold very well, going Platinum in the US and Gold in the UK and Canada. In the US the album went to number 27 on the Billboard album charts; in the UK it went to number 9. Rolling Stone magazine ranked the record number 1 on its list of the 100 Best Albums of 1980 and number 8 on its list of the 500 Greatest Albums of All-Time.


Side one kicks off with the title track “London Calling”, the records first single. In the UK it reached number 11 on the charts. In the US it managed to get to number 30 on the Billboard Club Play chart. The song mixes punk and reggae styles nicely as it delivers its politically charged message about problems in Britain set against a post-apocalyptic backdrop. The opening is a classic with that steady rhythm and the ominous bass. I love the screams too - very cool.

“Brand New Cadillac” was originally performed in 1959 as a blues song by Vince Taylor. I love the surf-rock guitar on this one; it gives the Clash’s cover a retro feel to it.

“Jimmy Jazz” has a nice cool, laid back feel to it. It provides the first side yet another interesting musical dimension. The Irish Horns provide the brass on this one.

“Hateful” kicks the tempo back up a bit with a ratta-tat-tat rhythm. It really gets my toes tapping.

“Rudie Can’t Fail” tells the story of a young man who would rather party and live life in the moment instead of take on adult responsibilities. Again, this one has a good beat to it, and Joe Strummer shares the lead vocals with Mick Jones in a nice duet.

Side two opens with “Spanish Bombs”, a song that makes ample reference to the Spanish Civil War from the late 1930’s. I like how the up-tempo music contrasts the seriousness of the lyrical topic.

“The Right Profile” is next. The Irish Horns are back again to add to the pop sound of this one. The lyrics tell of the trials and tribulations of actor Montgomery Clift.

“Lost in the Supermarket” slows things down a bit. The song talks about the increased consumer-focus and commercialization as well as suburban life. I know this one quite well as my older brother played it very often. In fact, I use a sample of this song for the custom ring-tone I have set up when he calls my cell phone.

“Clampdown” was the second single and it reached number 16 on the UK charts. The lyrics are critical of the capitalist society, referencing factory work and hourly-wage system of pay. The music has a heaver punk rock sound to it that goes back to the band’s roots. This is one of those songs you want to crank the volume up on when you hear it.

“The Guns of Brixton”, done in a reggae style, reflects upon the tensions building in Brixton in the late 1970’s. In 1980, racial riots actually erupted there so the song was sort of a chilling precursor if you will. It also stands out in that it is the only one on the album where Paul Simonon provides the lead vocals.

Side three starts with “Wrong ‘Em Boyo”, a song that features Mickey Gallagher on the organ. I like how it opens with a reference to the rock classic “Stagger Lee”. The second half is very bouncy.

“Death or Glory” is another song that talks about adulthood responsibilities. It has a catchy guitar hook and a sing-along chorus which I enjoy. Hearing it now will have it in my head all day.

“Koko Kola” is next. The lyrics are a commentary on the advertising world, targeting particular the Coca-Cola soft drink.

“The Card Cheat”, a song about a gambler in love, features pleasant piano playing by Mick Jones.

Side four begins with “Lover’s Rock”, a surprising romantic pop-rock song. I like the funky guitar solo in the later half of the track.

“Four Horsemen” is back to the hard rocking punk roots once more. I like how the wailing guitars bounce from speaker to speaker on this one.

“I’m Not Down” is a fusion of punk and funk. The message is that of persistence in the face of diversity and hardship.

“Revolution Rock” is much more of a revolution reggae, bring back those island grooves for this track. It is actually a cover of a song originally done by Danny Ray and the Revolutionaires a few years prior.

“Train in Vain” was the third and final single; it went to number 4 in the UK and number 23 in the US. Originally the track was not listed on the liner notes because it was added at the last minute. The song is basically a love song in the classic sense of Tammy Wynette’s “Stand by Your Man”. I really am a fan of the rhythm on this one; it has a nice driving locomotion much like an actual train.

I was a freshman in high school when London Calling was released. My older brother was a freshman in college and a huge fan of the band. When he came home that May, this was an album I heard quite a bit - blasting from the speakers of his stereo in the house or in his car. I definitely became a fan of the Clash thanks to the exposure of their music he provided.

Thirty plus years later, I think the album still holds up very well. The Clash really put out a classic with London Calling.
Posted by Martin Maenza at 5:20 AM

Best. Album. Ever. EVER!