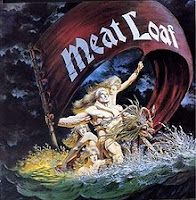 After much success with the 1977 debut Bat Out of Hell (for that review click here), Jim Steinman was ready to start work on the next album for Meat Loaf. However, things didn’t quite pan out the way Steinman had hoped; the combination of touring, drugs and exhaustion caused Meat Loaf to lose his voice. It would be a few more years before the time was right for them to come back together on 1981’s Dead Ringer.

As a sophomore effort, there was a lot of expectation for the album. Compared to Meat Loaf’s debut, though, some might consider this one a bit of a disappointment. It did, however, get certified Platinum in the UK (where it went to number 1 on the charts) and Gold in Canada. In the US, the album reached number 45 on the Billboard Album chart.

The first side of the album roars out of the gate with “Peel Out”. This fourth single from the album, which failed to make any kind of major chart showing, is about getting away from everything in the past and starting over. Singer Leslie Aday helps on the vocals of this one. It is kind of symbolic in a way for Meat Loaf was ready to take off in a new direction after being off-road for a few years.

“I’m Gonna Love Her for Both of Us” was the second single from the album. It went to number 84 on the US Billboard charts and number 62 in the UK. The song has a heavy piano opening that sets the tone nicely. The lyrics tell of a guy who decides to pursue a former girlfriend of one his buddies. It has a bit of a classic Fifties rock sound to it in parts, an era that clearly inspires Steinman in his compositions.

Things slow down a bit for the beautiful ballad “More Than You Deserve”. If there was any question about Meat Loaf’s voice being shot, this song completely dispelled that thought. He does a fantastic job on this one.

Side two opens with the promise “I’ll Kill You If You Don’t Come Back”. Like so many of Steinman’s composition, this one tries to put into words the confusion of teenaged love. The song is a decent, mid-tempo rocker.

“Read ‘Em and Weep”, the album’s third single, didn’t do well on the charts either. However, in late 1983, the song had some better luck when Barry Manilow recorded it (it spent ten weeks on the US Billboard charts where it reached number 18, and it spent six weeks at the number 1 spot on the Adult Contemporary charts). I have both versions in my music library but I am a little partial to this original version. I think Meat Loaf’s voice has a better handle on the raw emotion of the lyrics.

“Dead Ringer For Love” was the first single from the album; while it failed to chart in the US it did reach number 5 on the UK charts. This is by far my favorite song from the album, in part because it is such a fun duet between Meat Loaf and Cher. I love the energy level of this one - four and a half minutes of pedal-to-the-floor, hard-rocking beats and a wall of horns thanks to Lou Del Gatto, Tom Malone, Lou Marina and Alan Rubin. And how about those African logs for percussion by Jimmy Maelen? This five-star track on my iPod never fails to get me into a great mood.

The album closes out with another softer ballad “Everything Is Permitted”. It has all the dramatic cues and lyrics that I come to expect from a Steinman ballad. Again, perfect for teenagers (of which I was at the time this came out) of the early 80’s.

As I noted in the Bat Out of Hell review, I have been a Meat Loaf fan since his debut. But, for me, these early 80’s albums from him sort of went under my musical radar until the early 90’s. When the sequel to the debut album came out in 1993, my appetite for Meat Loaf (no pun intended) was insatiable. I simply had to get more of his music. Luckily for me there were a number of things in his back catalog, including Dead Ringer, that I could seek out. I am glad I did.
Posted by Martin Maenza at 5:24 AM