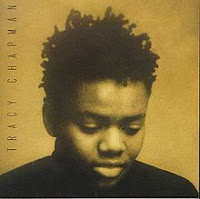 The American singer-songwriter Tracy Chapman is just a year older than me. She was born in 1964 in Cleveland, Ohio, and was inspired to be a musician by watching shows like Hee Haw. After playing her guitar in coffeehouses while in college, she eventually was signed to the Elektra Records label and released her self-titled debut Tracy Chapman in 1988.

This debut record was very popular, going multi-platinum the world over. It went to number 1 in many countries (the US, Canada, the UK, Germany, Italy, Austria, and the Netherlands). The record helped her to win the Grammy Awards for the Best New Artist and for Best Contemporary Folk Album in 1989. Tracy Chapman was rated number 10 on Rolling Stone’s list of 100 Greatest Albums of the 80’s and number 261 on its list of the 500 Greatest Albums of All-Time.

Side one begins with “Talkin’ Bout a Revolution”. While it only went to number 75 in the US, it did become a Top 40 hit in other countries like France, Austria and Holland. The song has a simple chord progression that is played throughout by Chapman on her acoustic guitar. The lyrics paint a picture of poverty and hardship, and how it is time for a change.

“Fast Car” was the album’s first single, spending twelve weeks on the Billboard charts and peaking at number 6. The song also won the Grammy Award for Best Female Pop Vocal Performance in 1989. The lyrics focus on people who grew up in poverty; the singer wants to leave town with her lover to find a better life. Chapman’s voice really conveys the emotion well on this, my favorite song from the release.

“Across the Lines” is a song that talks about the segregation of races that still existed across the US at the time. In many cities and towns, there were clear delineations of neighborhoods which can lead to conflicts among people. Sadly, over twenty years later, this condition still exists.

“Behind the Wall” is a stark look at domestic violence. Chapman sings this one unaccompanied, her powerful voice alone conveying the seriousness of the song’s message. That minute and fifty seconds are very moving.

“Baby Can I Hold You” went to number 48 on the US Billboard charts and number 19 on the US Adult Contemporary charts. It is a sweet love song and, much like early songs by Melissa Etheridge, gives no hint of Chapman’s sexual orientation.

Side two opens with “Mountains O’ Things”, a song that comments on materialism gained at the expense of others. I really like the percussion on this one provided by Paulinho Da Costa and Denny Fongheiser. The whole song has a nice world-music vibe to it.

The lyrics of “She’s Got Her Ticket” tell of a woman who has an opportunity to use a plane ticket to get away from the harsh world that she grew up in. The tropical island swing to the music represents the possible destination.

“Why?” asks some very hard questions about the times, a plea for answers from the government and the authorities. Jack Holder plays the Hammond organ on this one.

“For My Lover” was first recorded back in 1986 and released with Fast Folk Musical Magazine, a Greenwich Village Folk publication. The song tells of a woman who goes to jail for a crime committed all in the name of love. Ed Black accompanies Chapman on the steel guitar.

“If Not Now…”, a gentle ballad, is next. Holder provides the piano base on this one.

The side and record closes with “For You”, a beautiful acoustic love song.

I was just out of college and living in an apartment in Raleigh, NC, when Tracy Chapman was released. One of my neighbors had the record which is where I was exposed to many of the tracks. I was very impressed with the songs and with Chapman as an artist, and I picked up a copy on CD a few years later. It is definitely a record everyone needs to hear at least once in their life.
Posted by Martin Maenza at 5:22 AM

I've never heard the entire album, but I *have* heard a rather wicked parody of Chapman that appeared on the TV show "In Living Color" (a/k/a the Wayans Employment Bureau). In the parody, Chapman lived in a second-story apartment in an urban area, and she rushed between her apartment windows holding her guitar, singing in a stream-of-consciousness fashion about what was going on outside (people getting robbed, etc.).

I remember that parody. "In Living Color" was always a wickedly funny show with its finger on the pulse of pop-culture.