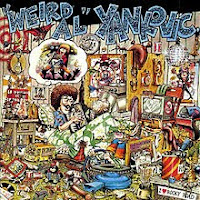 In the early 80's, musician and parodist Alfred Matthew Yankovic became known the world over as “Weird Al”. With his self-titled debut album released on April 26th 1983 “Weird Al” Yankovic, the 24 year old from Lynwood, California, began a musical journey of comedic songs that continues to this day. This first release had moderate success, reaching number 139 on the US Billboard 200 charts and certifying Gold. There were three singles released from the album which also included his very first song from back in 1979.


Side one opens with “Ricky”, a parody of Toni Basil’s hit single “Ricky”. The song is an ode to the classic sitcom I Love Lucy and features Tress MacNeille (who has done countless work in animation voice-over work, including shows like the Simpsons and Futurama). The single went to number 64 on the Billboard Hot 100 and was also the first song Al ever made a music video for. I’ve always been a huge fan of the classic sitcom and Basil’s hit, so this one is a perfect combination for me.

“Gotta Boogie” is an original composition about dealing with the remains of picking one’s nose. It has a nice new-wave sound to it with a driving drumbeat.

“I Love Rocky Road” is a parody of Joan Jett’s smash “I Love Rock ‘n’ Roll”. Al spins the lyrics around to sing the praises of a flavor of ice cream. The song fell short of piercing the Billboard Hot 100 (it stalled at number 106).

“Buckingham Blues” is an original song done in a classic blues style. The subject matter of the lyrics is the newlywed Prince Charles and Lady Diana.

“Happy Birthday”, another original composition, is a rather depressing way to celebrate the passing of a year. It is done in the style of Tonio K., another musician with a rather unique musical style and penchant for odd lyrics.

“Stop Draggin’ My Car Around” is a parody of the Tom Petty/Stevie Nicks duet “Stop Draggin’ My Heart Around”. The song is all about a guy trying to keep his car from being towed away and impounded.

Side two opens with Al’s first recorded release - the 1979 composition “My Bologna”. This parody of the Knack’s “My Sharona” was very popular on Dr. Demento’s weekly radio show of novelty and comedy records and helped launch Al’s musical career.

“The Check’s in the Mail” is another original composition. This one has a bit of a rag-time sound to the music.

“Another One Rides the Bus” is a parody of Queen’s hit “Another One Bites the Dust”. It too was an early Dr. Demento favorite. As a single, it also fell short of the Billboard Hot 100, peaking at number 104. This one happens to be the favorite track from this album for my teenaged son; he’ll often quote the lyrics.

The album then closes with three more original songs: “I’ll Be Mellow When I’m Dead” (a bouncy tune about living life to the fullest), “Such a Groovy Guy” and “Mr. Frump in the Iron Lung” (an oddity with just Al and his accordion).

While I did not own this album on vinyl, I knew a lot of these songs from Sunday listening to Dr. Demento during my last year high school year and freshman year of college. Admittedly, I am much more a fan of “Weird Al”’s parodies of known songs - they remind me a lot of things I used to read in Mad Magazine as a kid. Still, many of his original songs are fun too, especially since he changes up the musical genres or emulates other musicians’ styles.
Posted by Martin Maenza at 5:16 AM

I'm only familiar with one of Weird Al's non-parody songs: "Dare to be Stupid," which is of course a STYLE parody of Devo.