Captain and Tennille - Love Will Keep Us Together 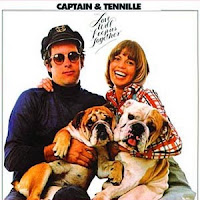 After meeting while working on a musical together and later touring with the Beach Boys, keyboardist Daryl “the Captain” Dragon and singer Toni Tennille discovered that they made beautiful music together. 1975 was a big year for them. First off their debut album Love Will Keep Us Together was released and then the two were wed (their thirty-five plus years and still going strong marriage is proof that the album title is true).


Side one opens with the title track. “Love Will Keep Us Together” was first recorded by Neil Sedaka and appeared on his 1973 UK LP The Tra-La Days Are Over and in the US on his compilation Sedaka’s Back. The Captain and Tennille’s version spent four weeks at number 1 on the US Billboard charts in 1975; it also won the Grammy Award for Record of the Year in 1975. I like its bouncy rhythm that always puts me in a good mood.

“Disney Girls” is a cover of a lesser known Beach Boys track, from their 1971 album Surf’s Up. I like the slow-swaying tempo of this one; the lyrics paint an image of a time when life was simpler and less hectic. There are times, as an adult, I’d like to spend some time back then.

“The Way I Want to Touch You” was the albums second hit single, spending fourteen weeks in the Billboard Top 40 and peaking at number 4. When I listen to this one, I can’t help but compare Toni’s vocals to those of greats like Carly Simon. This easily could have been one of Simon’s songs.

“Cuddle Up” is a song that the Captain co-wrote with Dennis Wilson for the Beach Boys’ eighteenth studio album, 1972’s Carl and the Passions - “So Tough”. This love song has a sweet piano solo between the verses and lovely orchestration that builds with the vocals on the chorus.

“The Good Songs” closes the side with a bit of a gospel feel to it.

Side two opens with another cover of the Beach Boys classic “God Only Knows”, a song that when charted in 1966 only reached number 39. This version slows down the original tempo even more, replacing the joined harmonies with a single voice filled with all the emotion and strength. It is a good take on the tune.

“Honey Come Love Me” is a morning after song, a pleasant and heartfelt plea to spend a little more time in bed.

“Feel Like a Man” takes a rag-time approach in its delivery. Coming from the mid-70’s it had a nice empowering message to women.

“Broddy Bounce” is fun little instrumental number that allows the Captain to play around on his keyboards. The song is named for one of their bulldogs who are featured on the cover of the album.

“Gentle Stranger” slows things down again with another ballad that tells of two lives crossing for one brief day (and night of passion).

“I Write the Songs” was penned by Bruce Johnson and was a number one hit for Barry Manilow in 1976. However, the Captain and Tennille were the first to record the song (they having worked with Johnson during their time with the Beach Boys). David Cassidy also released a version of the song later in 1975. Listening to the lyrics carefully, it is easy to see that the track speaks of the creative spirit in all of us and that the “I” in the title means “the music”. One of the lines explicitly states “I am music…”

I had Love Will Keep Us Together on vinyl back in 1975 when I was ten years old and still in fifth grade. I remember that I got it from a mail-order record club; my older brother and I split the cost and requirements of the membership. The uncomplicated pop music of the Captain and Tennille was what I heard on my AM radio and saw on TV variety shows. In fact, I remember fondly watching their variety show that ran from the fall of 1976 through the spring of 1977. Back then, I hardly knew much about dating or relationships, but this record certainly appealed to the romantic nature of my heart.
Posted by Martin Maenza at 7:51 AM

Email ThisBlogThis!Share to TwitterShare to FacebookShare to Pinterest
Labels: 70's, Captain and Tennille, Daryl Dragon, Love Will Keep Us Together, music, Toni Tennille