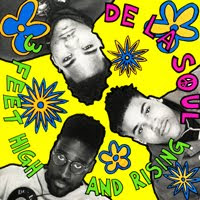 The trio of hip-hop performers from Long Island, NY, known as De La Soul (Kelvin Mercer aka “Posdnuos“, David Jude Jolicoeur aka “Trugoy“, and Vincent Mason aka “Pasemaster Mase“) made their recording debut on the 1989 release 3 Feet High and Rising. Produced by Prince Paul from Tommy Boy Records, the release was certified Platinum in the US where it reached number 24 on the Billboard album charts, number 1 on the R&B album charts, and number 13 in the UK.

The album was a critical success as well. It appeared in the top 10 of a number of publications best of lists for 1989. Rolling Stone listed it at number 346 of its 500 Greatest Albums of All Time. Q Magazine ranked it number 20 on its list of the 40 Best Albums of the 80’s.

De La Soul does an amazing amount of sampling on this album. Luckily, at the time the attitude towards sampling as very laid back and the requirement to obtain permission to do so was hardly present. Some of their sources are surprising and untraditional for rap at the time, but those chosen seemed to go hand-in-hand with the group’s outlook towards the positive. All together, it helped De La Soul establish its own unique style in the genre.

Side one opens with “Intro”, a track that emulates an old-time game show that introduces the guys in the group.

“The Magic Number” samples the classic Schoolhouse Rock song of the same name as well as a number of other sources including Johnny Cash and James Brown. As a single, it went to number 18 on the R&B charts and number 7 in the UK.

“Change in Speak” too samples some James Brown along with the Monkees’ “Mary Mary”.

“Cool Breeze on the Rocks” amazingly fits over 20 samples in a span of forty-six seconds. How many can you recognize?

“Can U Keep a Secret” has a nice tribal rhythm to it. The lyrics, focused on personal grooming, are delivered in a whispered style.

“Ghetto Thang” paints the picture of life in the poor neighborhoods of the city. The samples here come from James Brown, Kraftwerk and the Blackbyrds.

“Transmitting Live From Mars” features a classic French instructional sample. I'll admit, this one is a little bit out there.

As a single “Eye Know” went to number 14 in the UK (it was not released in the US). The track talks about young love using an upbeat groove and samples from Otis Redding, Steely Dan and Sly & the Family Stone. I am very amazed how these are all blended together as a backing sound for the raps.

“Take It Off” sounds like the guys are just messing around in the studio between takes. The lyrics make a commentary on fashion and how people hide behind labels and other things. They urge the listener to strip that all away to reveal their true inner self.

“A Little Bit of Soap”, less than a minute in length, samples the bass line of “Stand By Me”. The message is one about personal hygiene.

“Tread Water” is all about surviving from day to day with a positive attitude, told in an Aesop’s Fable sort of rap.

Side two opens with “Potholes in My Lawn”, the second single which went to number 22 on the Billboard Rap singles chart. The track has a nice laid back groove to it.

“Say No Go” was another single from the album. It went to number 18 in the UK, number 32 on the US Billboard R&B charts and number 11 on the Rap singles chart. The lyrics are a very much anti-drug message which was very popular at the time thanks to Nancy Reagan‘s “Just Say No“ campaign. The samples here include “Best of My Love” by the Emotions and “I Can’t Go For That (No Can Do)” by Hall & Oates.

“Plug Tunin’ (Last Chance to Comprehend)” was the group’s first single, released in 1988 before the album. It opens with a sample from Liberace, and it includes a harp playing sample. Very surreal.

“De La Orgee”, another short track, is just what you’d expect, a mix of sounds of a group of people in a communal love fest.

On “Buddy”, the guys are joined by the Jungle Brothers, Q-Tip from A Tribe Called Quest, Queen Latifah and Monie Love. Together all of them went by a posse called "the Native Tongues".

“Description” is another track that describes each of the guys in the group, using a five-line limerick style for each introduction.

“Me Myself and I” was the biggest single from the record. Thanks to a popular video, the song went to number 1 on the Billboard Rap, R&B, and Dance Club charts. On the regular Billboard singles chart it reached 34; in the UK it peaked at number 22. The song addresses the group’s frustration of being labeled as hippies. This is certainly my favorite track from the album as I love the groove it lays down with some very cool cuts and scratches.

“This Is a Recording 4 Living in the Fulltime Era (L.I.F.E.)” continues to give the group’s viewpoint on striving for peace and harmony, something that was less popular of a sentiment in the rap communities in the late 1980’s.

“I Can Do Anything (Delacratic)” is another short track that speaks to freedoms.

By the time 3 Feet High and Rising was released, I was already out of college and working my first job. I picked this album up on cassette, mostly intrigued by the single “Me Myself and I”; I have to admit that I had never heard anything like this before. I really liked that De La Soul was bringing something new to the hip-hop table - a sound that started down the road that would create “trip-hop”, a jazzy hip-hop sound, in the early 90’s.

People who listen to this record tend to fall into one of two categories: love it or hate it. I’m definitely in the “love it” side. I appreciate the positive messages of the group’s rap and the creative ways they did their samples and mixes.
Posted by Martin Maenza at 5:22 AM