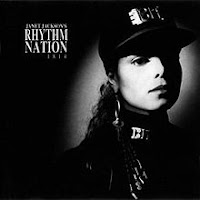 Coming off the success of her previous release, the youngest sister of the Jackson family clan put out her fourth studio album in 1989 entitled Janet Jackson's Rhythm Nation 1814. Her idea was to create an overall concept album that addressed social injustices. Once more she worked with producers Jimmy Jam and Terry Lewis (formerly of the Time) to create another powerhouse record.


In the US, the album debuted at number 28 on the charts and spent four weeks at the number 1 spot. Worldwide the record went to number 4 in the UK, number 7 in France, number 8 in Germany and Japan, and number 10 in Canada. The album also produced seven hit singles, six of which that reached the top 5 on the US Billboard charts (setting a record). It has sold over fourteen million copies since its debut.

Critically, the record was well received too. The album garnered Janet nine Grammy Award nominations total - five in 1990 and four in 1991; it won the Best Music Video Long Form award in 1990. Rolling Stone magazine ranked it at number 275 on its list of the 500 Greatest Albums of All-Time and number 27 on its "Women In Rock - the 50 Essential Albums" list. In 2008, Entertainment Weekly put the album at number 54 on its list of the Top 100 Best Albums of the Past 25 Years.

The CD and cassette releases of the album featured six additional interludes, ranging from three to twenty-one seconds in length. The vinyl release only had two interludes - "Interlude: Pledge" at the beginning and "Interlude: Livin'...In Complete Darkness" at the end, to bookend the twelve song tracks.

The first song on side one is the title track "Rhythm Nation". As a single, it spent twelve weeks on the US charts and reached number 2 (denied the number 1 spot by Phil Collins' "Another Day in Paradise"). It did reach number 1 though on the US R&B singles and Hot Dance singles charts. The message of the lyrics is a great one - that there needs to be unity and harmony among the races; we are all a single humanity that can share common beliefs despite geographic boundaries. I love the combination of the vocal sampling loop (from the 1969 Sly and the Family Stone hit "Thank You (Falettinme Be Mice Elf Agin)") as well as the new-jack swing rhythms on this song. It makes for a great dance workout.

"State of the World" was not released as a single to consumers but it was available for airplay on radio stations. It spent eleven weeks on the airwaves, reaching number 5 on the Top 40 Radio Monitor chart. As with the first track, this one too has amazing percussion to dance too. The lyrics, however, are very serious as they tell of a teenaged mother who struggles to keep her child fed and a homeless boy who lives on the street.

The new-jack swing sound continues with "The Knowledge". The vocals are delivered in a mechanized kind of way, as if provided by a computer. It gives the song a cold, sterile feel. But the main gist is that it says by having knowledge we can say “no” to things like prejudice, ignorance, bigotry and illiteracy.

"Miss You Much", the first single, reached number 1 in the US charts where it held the spot for four weeks. It was the first song recorded for the album too, with Janet doing the background vocals first and later coming back to perform the main verses. It is a straight forward love song, built off a simple phrase that makes up the title.

"Love Will Never Do (Without You)", the seventh single from the album, also spent a week of its total fifteen weeks on the US Billboard charts at the number 1 spot. Though the song was conceived as a duet, Janet did the verses in different octaves instead. She also did all of the background vocals too. I like the bouncy rhythm to this love song. This track completes a power-dancing suite; if these first five songs can’t get you on the dance floor, you are a definite wallflower.

It is time to slow things down. "Livin' in a World (They Didn't Make)" was lyrically inspired by an elementary school massacre in Stockton, California, that occurred in early 1989. The piano accompaniment and uncomplicated orchestration allow Janet’s voice to carry the song’s emotion.

Side two opens with "Alright", the fourth single from the album which reached number 4 on the Billboard Hot 200 chart during its twelve week run. The song includes a sampling of the 1972 song "Think (About It)" by Lyn Collins, a female soul artist who worked quite a bit with James Brown. This is another dance favorite from the record. I remember how much the songs from this album dominated the club scene in late 1989 and all of 1990. They make up the perfect soundtrack of my final year or so of clubbing (I settled down and got married in July of 1990).

"Escapade" also reached number 1 on the US charts (the Billboard singles, the R&B singles, and the Hot Dance singles). In fact, it held the Billboard top spot for three weeks of its fourteen weeks on the chart. The song was inspired by the 1965 classic "Nowhere to Run" by Martha and the Vandellas. This is one of the songs from this record that I like to sing along to; it is so positive and peppy.

It only took "Black Cat" six weeks to reach the top of the US Billboard single charts. This is the first song that Jane recorded that she also penned completely on her own. The song is quite different from most of her other songs in that it is a pure rock and roll number. It has a heavy guitar riff, played by Dave Barry; remixes of the song also have Vernon Reid of Living Colour and Nuno Bettencourt of Extreme providing additional guitar parts. The lyrics tell of a rebellious young man who is involved with gangs and drugs and of the young woman who wants to help him before it is too late. I think Janet does a credible job pulling off the rock genre.

After another trio of beat-driven tunes to dance to, it is again time to slow things down. "Lonely" opens with the sounds of falling rain that leads into a classic R&B slow-groove. The lyrics remind us that whenever we are feeling alone that someone to talk to is just a phone call away.

"Come Back to Me" keeps the slow-jam mood going. This single reached number 2 on the US Billboard charts and number 1 on the Adult Contemporary charts. I like how Janet delivers softly whispered lines as well as some understated vocal runs near the end. The rain sounds bookend the previous track nicely.

And that track directly moves into the final song "Someday Is Tonight", allowing the three to form their own musical suite. Here Janet turns up her seductive charms. I really like the jazzy sounds of this one, especially towards the end of the number.

I picked up Janet Jackson's Rhythm Nation 1814 on cassette shortly after it came out in late 1989. I was a big fan right out of the gate and played the tape very often on my car stereo and boombox back at my apartment.

Twenty two years later, I still enjoy listening to this album from beginning to end. I consider it a worthy successor to her Control album as it showed that, at 24 years of age, Janet had what it took to become a mega-superstar and a force to be reckoned with in the music business.
Posted by Martin Maenza at 5:15 AM