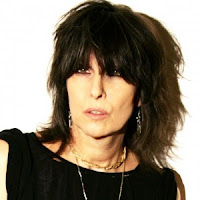 Today, September 7th, is the birthday of rock's amazing front-woman Chrissie Hynde. 60 years ago today she was born in Akron, Ohio.

Chrissie is one of those people you would want to use when playing a "Six Degrees of Seperation" game of the music world. This singer/song-writer/guitarist was in a band with Mark Mothersbaugh (later of Devo) while attending Kent State University (and was on campus on May 4, 1970, on the day of the famed shootings). In 1973 she moved to London and worked for a time at Malcolm McLaren's famed clothing shop. She was friends with a young Sid Vicious, and even attended auditions with the likes of Jon Moss (later of Culture Club), Tony James (of Generation X) and Mick Jones (later of the Clash). Finally in 1978, she formed the Pretenders with Pete Farndon, James Honeyman-Scott and Martin Chambers. In 1983, Chrissie had a daughter with Ray Davies (of the Kinks). She later married Jim Kerr (lead singer of Simple Minds) with whom she also has a daughter. 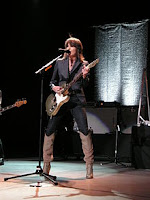 I've reviewed a few of the Pretenders albums previously. For your convenience, the links are below. Enjoy.

For Pretenders - Pretenders II click here
Posted by Martin Maenza at 5:16 AM