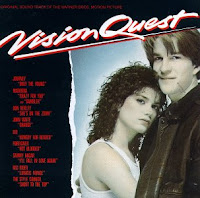 In 1985, a coming-of-age film that starred Matthew Modine, Linda Fiorentino and Daphne Zuniga hit theatres. Vision Quest told the story of a high school wrestler who falls for an older woman that is renting a room at his father's house. Madonna also makes an appearance in the film as a club singer. The film was moderately successful in theatres in the US, grossing $13 million.

The soundtrack album for Vision Quest was released three days prior to the film's opening. It boasted an interesting mix of performers.


Side one opens with Journey and "Only the Young". The song was originally recorded for their 1983 album Frontiers but was replaced by two other tracks. As a single, this song went to number 9 on the US Billboard charts. Steve Perry does his usual vocal magic on this mid-tempo rocker. I love the cascading guitar notes the dance behind the verses.

"Change" by John Waite is next. While this song didn’t make the Top 40, I remember it quite well - definitely a “lost hit” of the 80’s. It has a nice driving beat to it that gets in your head, along with the backup singers chirping “change”.

The Style Council offers up "Shout to the Top!", a single that also appeared on their 1985 album Our Favourite Shop. The track is a piano based dance tune that sounds like it stepped straight out of the disco days of Studio 54. And for me that’s a good thing. I like it a lot.

Madonna makes her first appearance on the album with "Gambler", a single that was released nine months after the film debuted. The song went to number 33 in France, number 25 in Germany, number 23 in Switzerland, number 10 in Australia and Belgium, number 9 in the Netherlands and Norway, number 4 in the UK, and number 3 in Ireland and Italy. This song has an amazing dance groove, reminiscent of the songs off her first two albums. I remember this song was a big club favorite at the time - heck, all Madonna tracks were; many fun evenings out included grooving to this song.

Don Henley, with help from Go-Go's Belinda Carlisle and Jane Wiedlin on back vocals, is next with "She's on the Zoom". The song has a bouncy rock-beat to it, telling the trials and tribulations of a high school girl.

Side two gets off to a rocking start with Dio and "Hungry for Heaven". This song also appeared on the heavy metal band's seventh studio album, 1985's Sacred Heart with a different arrangement. I like the thundering guitar on this, so typical of a lot of metal hits of the time. The lyrics are typical “go for the gold” motivations that you’d see in any film dealing with competitive sports. It really is just a harder rocking “Eye of the Tiger”.

The Canadian rock band Red Rider takes us to the "Lunatic Fringe", a track from their 1981 album As Far As Siam. The song has a great, mood setting opening; you feel like you are out on the edge. Then the guitar chords kick in. I like it. This is one of those songs for barreling down an abandoned highway as the sun is just starting to crack the horizon.

Sammy Hagar proclaims "I'll Fall in Love Again", one of his last solo tracks before taking over as the lead singer of Van Halen the following year. The song is a pretty straightforward rock track

Foreigner is on fire with "Hot Blooded". The song was originally released in 1978 on the band's second studio album Double Vision and went to number 3 on the US Billboard singles chart. This song takes me right back to my days in junior high school - hearing this one constantly on the radio back then. It has a classic guitar riff that anyone who grew up in those days knows instantly.

Madonna closes out the record with her smash hit "Crazy for You". This was the first single from the album, released two weeks prior to the film's debut. It went to number 1 in the US (right after USA For Africa’s “We Are the World” and right before Simple Minds’ “Don’t You (Forget About Me)”), Canada and Australia, and number 2 in Ireland, New Zealand and the UK. The opening lyrics paint the perfect image for me; a couple dancing slowly in a dimly lit dive bar with wooden booths where empty beer bottles are sitting on the table. It reminds me of the college town bars near the hometown where I grew up. This song was the slow dance track for many months in 1985, a guaranteed part of the end of the night and the time to make that move on the girl you had been flirting with all night. Just listening to it now, with my eyes closed, brings back those moments and filling every one of my senses. Ah. That’s the power of music, baby.

I never owned the Vision Quest soundtrack per se or even have seen the entire movie (I may have caught parts on cable here and there). However, I do have a number of the songs from various sources already in my music library. Pulling these up and filling in the holes, I definitely found a few more like “Change” and “Shout to the Top!” that I need to add to my music library a.s.a.p. (or when I get my emusic.com monthly allotment early next week). I think it is an overall pretty good mix of music from the mid-80’s and worth checking out.
Posted by Martin Maenza at 8:14 AM

I saw this movie years ago, and grabbed hold of me. Maybe it was Linda F's dark sexiness. Or the image of Chute running up the steps with that railroad tie. (have you reviewed the film? something tells me you have)

"Only the Young" has been one of my favorite songs for decades on the Journey Greatest Hits album. And I recall Madonna performing "Crazy For You" in the film itself.

Derrick, nope - I have never seen the movie all the way through even. Maybe someday.