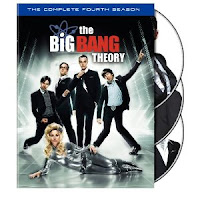 This week, season 4 of the Big Bang Theory came out on DVD.

Besides the 24 episodes as seen on TV, the set also includes a few features like: looking at the theme song by the Barenaked Ladies, a gag reel, and three segments where the actors ask each other questions. I picked up my copy at the local Target which had an exclusive fourth disk that included the show's San Diego Comic-Con panel discussion from the summer of 2010 (bridging season 3 and 4).

As most know, this happens to be one of my favorite comedies on TV right now. I love the whole geek-vibe of the show (from the science terms to the social awkwardness to the comic book references).

And I think season 4 really helped to expand the show nicely. At the end of season 3, we met Amy Farrah Fowler (played by Mayim Bialik); this season we got to see her role expanded as she proved to be more than just a female version of Sheldon (played by the Emmy winning Jim Parsons). We also got to see more of Howard's (Simon Helberg) girlfriend Bernadette (played by the cute as a button and very funny Melissa Rauch). I find that relationship has really added a new dimension to the show too. Having both of these ladies around created a female circle for Penny (Kaley Cuoco). Finally, the addition of Pria (played the gorgeous Aarti Mann), the sister of Raj (Kunal Nayyar) and new love interest for Leonard (Johnny Galecki), was also good for some interesting character interactions.

A few of my favorite episodes from this season involve the entire cast. I love the episode where the gang dresses up as the Justice League for the costume party at the comic shop (I'm a comic book geek and Justice League was my favorite team ever since I was a kid in the 70's - it was one of the first super-hero team comics I ever bought). Another one that just cracks me up with the road-trip to the Science Conference (and ultimately the panel discussion). Then there is the one where the girls take Sheldon out dancing.

I could go on and on, but I will just say that if you are a fan of the show you'll likely want to check this out.

1) the season premiere episode is this coming Thursday (9/22/11) with a one-hour double episode. This one will deal with the cliffhanger ending from season 4. Should be interesting to see where things go from there. I hope the new season also gives us a return visit of "Evil" Wil Wheaton along with Leonard's and Sheldon's moms.

2) the show begins its daily run in syndication next week as well. Check your local cable listings for channels and times. Now you get your dose of Big Bang five times a week.
Posted by Martin Maenza at 5:34 AM

Martin, its nice to see someone sharing their love for Big Bang--this show is in my Top 4 Favorites & has been since Season 2.

The other day I looked up all the actors ages out of curiosity--Sheldon is the oldest, born in 1973 & Penny is the youngest, born in 1985! Anyway, what I find REALLY surprising is that you and i both know a lot of guys (Hello, Blammo) that could fill these characters shoes, yet the couple times I brought it up over there, no one admitted to watching the show, let alone being a fan. How can that be??? Sorry for the ramble--enjoyed your post here & I can't wait for next Thurs and the season premiere! :)