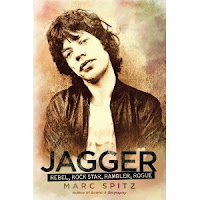 Mick Jagger has always been a bit of a mystery. The famed front man of the Rolling Stones was one who shied away from in-depth interviews. Music journalist Marc Spitz felt though that Mick’s story needed to be told, and he went about compiling recollections of others to create this biography. Using over thirty interview, fifty magazine articles and seventy biographies, he pulled together the facts to tell the tale. The end result is Jagger: Rebel, Rock Star, Rambler, Rogue, an interesting look into the life of Mick and those around him - from the childhood days in middle-class, postwar London up to his most recent performance at the Grammy Awards in 2011.


Those who follow my blog regularly know that I am very much into popular music and the history behind it. So, I was very excited to come across this title. The book is not scheduled for release until later this week (September 8th, 2011 - you can pre-order it now wherever fine books are sold), but I had the opportunity to review an advanced copy. And I have to say that I thoroughly enjoyed it.

Spitz works to shatter the long held myths about Mick, using factual accounts from various sources to support his position that the artist is a complex, multi-faceted entertainer. He examines Mick’s career with the Stones as well as his roles as an activist in the 60’s, an actor, and a solo artist. Also examined are the many famous relationships Mick had with such women as Marianne Faithfull, Bianca Jagger and Jerry Hall (among others).

I thought I knew a good bit about Mick Jagger but this book helped fill in a lot of details for me. I learned many of the stories and events behind songs I’ve known for decades. I also was pleased to see the details regarding Mick’s involvement with bring Living Colour to the public eye in the late 80’s. This biography is a fast-paced, compelling read that is told in a very comfortable narrative style.

I strongly recommend this book to anyone who has a fascination with the history of music, especially if they are interested in the Stones and Jagger.
Posted by Martin Maenza at 1:21 PM