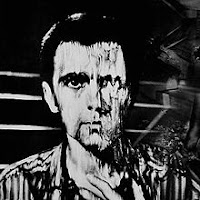 On May 16th of 1980, the former member of Genesis released his third studio album. Like the first two and the fourth, it was simply titled Peter Gabriel but it is also known by its designation of three (III) and by the name “Melt” due to the melting facial image of the artist on the front cover. No matter what you call it, it was his best selling solo album up to that time as it went to number 1 in the UK and number 22 on the US Billboard Album chart. It spent a total of twenty-nine weeks on the latter chart.


Side one opens with “Intruder” which also features Gabriel’s former band mate Phil Collins on drums. The rhythm is very methodic as the lyrics describe a thief breaking into someone’s home. The words are delivered in a way that indicates someone who enjoys the perverse thrill of committing the crime. The xylophone solo is a nice touch.

“No Self Control” also features the xylophone prominently. The rhythms and lyrics here are dark and foreboding. They seem to mirror the intense emotions of greed and lust. Collins also plays the drums on this one, and Kate Bush provides some of the backing vocals.

“Start” is a short instrumental interlude.

“I Don’t Remember” brings to mind an interrogation, with the person on the hot-seat feigning amnesia. Collins’ drums provide a nice driving beat.

“Family Snapshot” is a song the reflects on the assassination of John F. Kennedy but taken more from the viewpoint of the gunman. It starts out with a gentle piano that builds with more urgency as the song progresses. It ends with the gentle imagery of JFK Jr. in the White House. It is a very powerful piece.

“And Through the Wire” features guest guitarist Paul Weller from the Jam. This song too has a level of tension to it as the lyrics talk about a distrust in the radio airwaves.

Side two begins with “Games Without Frontiers”, the albums sole single to chart on the US Billboard Hot 100 (it reached number 48). In the UK, the song went to number 4. The song was inspired, in part, by a European game show where the teams from different cities and countries compete against one another. In the UK, the game show was known as It’s a Knockout, which is referenced in the song. The lyrics criticize nationalism and war, and they name drop such historical figures as Adolph Hitler and Enrico Fermi. Kate Bush provided backing vocals on the tune.

“Not One of Us” is an up-tempo track though the chorus is very much one that denounces those who do not conform.

“Lead a Normal Life” has a more ominous tone; the lyrics question the validity of mainstream optimism and joy. This was also the B-side to the album's single.

“Biko” takes a different position from the rest of the songs of the album. This one is clearly a protest song that tells of Steven Biko, a noted black South African anti-apartheid activist. I like the use of the native African rhythms and the chants at the beginning and the end.

Peter Gabriel III features some very complex compositions and some very powerful imagery. The record is not one I would listen to if I were trying to unwind and relax. It is definitely one of those albums that is made to make you think.
Posted by Martin Maenza at 5:30 AM

I heard an interview with Steve Lillywight where he stated that one of the goals for recording this album was to use absolutely no cymbals. Interesting concept for a rock record. Additionally, this brought out the "gated" drum sound.
Wikipedia has a nice article on it here:

10DD, I have read about the "gated" drum sound having been first introduced here. It definitely became a signature of Phil Collins' music after that point. Definitely groundbreaking. Thanks again for reading and for the comments. They are always welcome.