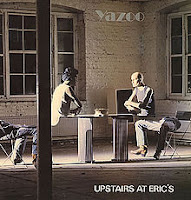 Around the rest of the world they were known as Yazoo; in the US (due to copyright issues) they were known as Yaz. However you refer to the duo of Vince Clarke and Alison Moyet, there is no denying their amazing collaborative efforts. Though their time as a group was short-lived, their musical influences have been felt in other bands for the past three decades. Their synth pop sound perfectly combined the electronic trends of Europe to the American approach to R&B.

In 1981, Clarke was coming off his time with Depeche Mode. The songwriter and keyboardist teamed up with a newcomer singer Moyet and together they put out two albums. The first was Upstairs at Eric’s, a debut released on August 23rd, 1982, that was certified as Platinum. In the UK, it reached number 2 on the charts. In the US, it only reached number 92 on the Billboard charts but got an incredible amount of play in clubs and on college radio stations.


Side one begins with “Don’t Go” which was the second single from the album. It spent eleven weeks on the UK charts and made it to number 3. In the US it spent two weeks at number 1 on the Dance Singles chart. The synth opening is wonderful and draws me right in. The syncopated beat instantly gets my feet moving. This track, a five-star in my book, was a huge dance favorite of mine back in the day. I think it is a perfect way to kick off the record.

“Too Pieces” is next. Clarke really has room to play with the synth lines here as his playing is in the spotlight on this one.

I find the main melody of “Bad Connection” to be very catchy. The lyrics tell of a desperate individual who is having a difficult time ringing up their love. I really like the phone sounds and the operator’s voice in the center section of the song.

“I Before E Except After C” is a bit of an odd, experimental piece. It is mostly a spoken word piece with multiple layers of dialogue. There is a bit of moody music that comes in about a third of a way through that just adds to the composition. I must admit that it is not a track of which I am a huge fan.

Moyet‘s voice alone opens “Midnight”, a song that is full of emotion and power. The accompaniment is gentle and subdued, allowing her amazing vocals to shine.

The Lord‘s Prayer is sprinkled through out “In My Room”, a track that combines various sound threads into a musical mosaic. It really makes the song quite a bit unique in sound. I like the way the phrase “electric light” is presented.

Side two opens with “Only You”, the first single. Clarke wrote the ballad before leaving Depeche Mode and offered it to them (they declined). In the UK it spent fourteen weeks on the charts and went to number 2. In the US, the song reached number 67 on the Billboard Hot 100 and number 38 on the Adult Contemporary charts. This is one I find myself singing along to whenever I hear it; it is one of those songs that I connect to quite well for some reason. I think it is beautifully done.

“Goodbye Seventies” is another solid dance groove. The lyrics address the changes coming for a new decade as the 80’s say farewell to the 70’s.

Next up is my second favorite track on the album. “Situation” rightfully so also went to number 1 on the US Dance Singles chart; the funky beat and synth melodies are irresistible. This one really gets me moving as well; I used to dance about to this one in my room as well as a teen whenever it came on the radio, imagining I was in some crowded club somewhere.

Things slow down with the haunting ballad “Winter Kills”. Moyet’s vocals really push the piece beyond the emotional spectrum.

“Bring Your Love Down (Didn’t I)” closes the record out with another dance favorite. The chorus on this one is catchy.

I became a fan of Yaz after hearing many of these tracks on the local college radio station while I was still in my senior year of high school. I was full-on into the synth pop scene and this record was one of the best out there. While I never had it on vinyl, I did pick it up on CD shortly after we got our first player in 1990. To this day Upstairs at Eric’s is still a favorite of mine with its mix of synth-dance gems and experimental pieces.
Posted by Martin Maenza at 5:12 AM

One of my all time favorites! Still crank it!