Thompson Twins - Into the Gap 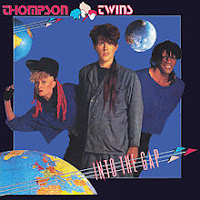 After much success with their previous release Quick Step and Side Kick (click here for that review), the Thompson Twins moved on to their fourth studio album Into the Gap on February 13th of 1984. The album
had multi-platinum sales, reaching number 1 in the UK and number 10 on the US Billboard Album charts.


“Doctor! Doctor!” is the first track on side one. This second single spent nine weeks on the Billboard charts where it reached number 11; in the UK it reached number 3. I love how this one opens with gently with the percussion and then builds with the first verse to the sing-along-chorus. Tom Bailey’s lead vocals and the synthesizer bridge are entrancing.

“You Take Me Up” may have fallen short of the Top 40 in the US (it went to number 44) but did very well in the UK (where it went to number 2). The rhythm calls to mind men working on the railway, taking turns in perfect coordination to hammer down metal spikes into the wooden rails. Yes, I know, a very odd image but that’s what the song does for me. I like how the chorus is sort of an escape from that, light and airy. Bailey’s harmonica and Alannah Currie’s xylophone are standouts too.

The album‘s first single was “Hold Me Now”, which spent fifteen weeks on the Billboard charts and peaked at number 3. In the UK, it went to number 4. The music and the lyrics are perfect as they tell the tale of a couple whose relationship is coming apart at the seams. This song is my favorite from the album even though it is very sad. In fact, I often find my eyes welling up and a lump forming in my throat when I hear it (happening right now as I listen to it for the review). While it doesn’t remind me of a specific time, person or event in my life, I connect to this song on a very core level. I often sing along to it.

I enjoy the funky rhythm of “Day After Day”. I really love that all of this is achieved without the typical bass guitars. The band uses synthesizers and various percussion instruments to achieve their sound.

Even with a moody opening, “No Peace for the Wicked” is a nice song to dance to. My favorite line is “some times I think they’re madder than hatters having tea”; Lewis Carroll’s Alice’s Adventures in Wonderland and Through the Looking Glass were always favorite books of mine growing up.

Side two rises up from “The Gap”; the track went to number 69 on the US Billboard Hot 100. With its exotic rhythms that bring to mind some place in the Far East, this song is easily my second favorite on the album. There are so many layers to it, giving it a rich and vibrant sound.

In the UK, the single “Sister of Mercy” got as high as number 11. The slower, methodic tempo mirrors this musical tale of murder.

With its atmospheric opening, “Storm on the Sea” continues along the same measured pace. If I close my eyes, I can see a single buoy rocking back and forth in choppy waters as the dark clouds in the sky, heavy with the coming rain, are about to let loose their fury.

The album closes with a question - “Who Can Stop the Rain?” Again, the topic of an ending relationship is presented. I really like how on this, and all of the tracks really, that you can pick out each instrument very distinctly.

Into the Gap came out in February of my freshman year of college; I picked this one up on vinyl around the time of my birthday while home on break. Having become a big Thompson Twins fan a year prior, I was confident that this one would not disappoint. It quickly found a place in heavy rotation on my turntable and is still one of my favorites from that year.
Posted by Martin Maenza at 5:26 AM

I like the Thompson Twins more now than in the 80s. Guess I wasn't grown up enough to appreciate what great songs they were.

The 'Twins certainly had a very distinct signature sound. A warm fat sliding bass and exotic percussion with enchanting build up verses that usually led to soaring choruses. I remember a few cuts from this album well, and they will forever mark and be the key to reliving memories from the past. Great review, thanks.

Thanks, as always, for your wonderful comments, my friend. Glad to have you reading.