Huey Lewis and the News - Picture This 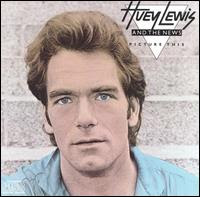 After their 1980 debut album (click here for that review), Huey Lewis and the News spent a little time to put together their sophomore release. The extra time seemed to be just what the band needed as Picture This, released January 29th 1982, helped the band breakthrough. With the help of three hit singles and the advent of the video music format on MTV, the album spent thirty-five weeks on the US Billboard album charts, peaking at number 13, and was certified Gold.

The first track on side one is “Change of Heart” This mid-tempo rocker tells the tale of a woman who has decided to end a relationship. Drummer Billy Gibson delivers a nice steady beat here.

“Tell Me A Little Lie” has a nice moody swing to it, thanks to Sean Hopper on the keyboards. The lyrics talk of the untruths strangers give one another when they meet and have no plans to pursue anything further beyond brief flirting.

“Giving It All Up for Love” is a cover of a song written by Phil Lynott, the singer and bassist for Thin Lizzy. Lewis played harmonica on Lynott’s first two solo albums so this was sort of a return favor. I like the guitar chords on this one, provided by Chris Hayes, Johnny Colla and Mario Cipollina; they are bouncy and very infectious. Colla also provides the saxophone on this one.

“Hope You Love Me Like You Say You Do” was the second single from the record. It only spent four weeks in the Top 4, peaking at number 36. I’m kind of surprised the song didn’t do better. It has a nice pop groove to it and features the Tower of Power on horns.

“Workin’ for a Living’” was the third and final single. While it just fell shy of the top 40 (peaked at number 41), it did reach number 20 on the US Mainstream Rock chart. This is my favorite song from the album; I love its level of energy and hard-rocking drive. Huey Lewis really works the harmonica on this one. This was always the perfect Friday afternoon song, a nice transition from the work week to the weekend. In 2007, Lewis re-recorded the song as a duet with Garth Brooks (it appears on Brook’s The Ultimate Hits album) and released as a single which went to number 19 on the US Billboard Hot Country Songs chart. I have this version in my music library as well and like its spin on this 80’s classic.

Side two opens with the band’s first top-ten hit “Do You Believe in Love”. This first single spent thirteen weeks on the Billboard charts, peaking at number 7. Written by Mutt Lange, Lewis tweaked the song before his group recorded it; the original version entitled “We Both Believe In Love” was recorded in 1979 by the British band Supercharge with Lange singing lead vocals. I remember the music video well - with Lewis serenading his sleeping girl in the bedroom with the rest of the band popping up from behind the bed to join in. Very funny. They seemed to do very well interjecting comedy into their videos.

“Is It Me” continues the slower tempo with a tune that was a joint collaboration between Lewis, Hayes and Hopper. I like the harmonies on this one as well as Colla’s saxophone solo.

“Whatever Happened to True Love” is next up. The song laments about the difficulties of finding true love and happiness in the fast paced world of the day.

“The Only One” tells of a one-time big man on campus who, three years later, has very little going for him. There was an accident the cost him his girlfriend and his future.

“Buzz Buzz Buzz” is a cover of a 1950’s song by the Hollywood Flames, an early American R&B group. It has those classic early days of rock ‘n roll feel to it, from the doo wop vocals to the saxophone accompaniment. The News clearly appreciates the roots of rock and excels at these kinds of songs.

While the album is just under thirty-four minutes long, Picture This is a very tight record. Huey Lewis and the News get in, get the job done and get off the stage. Listening to it, you don’t feel like there is a lot of filler here.

The album came out during my junior year of high school. Thanks to the hit singles, this was an album I bought for myself on vinyl from Record Giant at the nearby plaza early that summer. Picture This spent many years on my turntable and was one I had made a copy of on cassette for my first car too. Today, twenty nine years later, this one is still a favorite of mine. Listening to it takes me right back to those final days of high school and my early years in college.
Posted by Martin Maenza at 5:34 AM