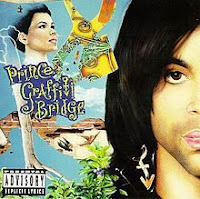 In 1990, Prince wrote, directed and starred Graffiti Bridge, the sequel to 1984's highly successful Purple Rain. The film follows the Kid (Prince) who is now a performer at his own club Glam Slam. Morris Day also returns, playing himself, as the owner of a number of clubs including Pandemonium. However, rivalry still exists between the two which culminates in a showdown between the venues. The film also stars Ingrid Chavez, Jerome Benton, the Time, Mavis Staples, Tevin Campbell, and George Clinton.

Critically, the film was panned. At the box office, it barely managed to recoup the original production cost.

The double-record soundtrack album, however, did fairly well. I went Gold in the US, the UK and Canada. It reached number 6 on the US Billboard 200 chart and the US R&B Albums chart, number 4 in Germany and the Netherlands, number 3 in New Zealand, number 2 in Norway and Switzerland, and number 1 in the UK. It also produced a number of hit singles for Prince and the other artists on the record.

After a whispered prayer to his father, Prince explodes into "Can't Stop This Feeling I Got". The song has an upbeat rhythm punctuated by guitar and hand-claps. This high octane opening is the perfect way to kick off side one.

"New Power Generation" delivers a heavy but funky groove that heralds a new chapter in the Prince saga. With this album, he introduced a new backing band that would be known as, naturally, the New Power Generation. The song is full of revolutionary bravado (no pun intended). As a single, it went to number 64 on the Billboard charts in the US and number 26 in the UK.

The Time is next with "Release It". I love the saxophone squeal and the driving drum beat on this one. It is hard to sit still when this one is blasting from the speakers. Of course, Morris and the guys bring all their attitude and charisma to this one, and it comes across in spades.

Prince closes the side with "The Question of U", with its slinky and sexy swagger. He sings this one with his higher vocal register, adding a cool and almost detached stance to the lyrics.

Side two opens with "Elephants & Flowers". This is a typical Prince song using symbolism in the title for the male and female sexual organs. I like the strumming guitar on this one and the layers of percussion.

Newcomer Tevin Campbell is next with "Round and Round", a single that spent thirteen weeks on the Billboard singles charts and peaked at number 12. At the time he recorded this, Tevin was only fourteen years old, but his potential as a singer was evident in these four minutes. The song, my second favorite track on this soundtrack, was a dance club favorite back in the day, guaranteed to get the crowd moving and shaking. What a wonderful debut.

Prince teams with George Clinton on "We Can Funk". The jam has a good groove as these two music legends mix it up and work it out. After this, Clinton would do some recording in Prince’s Paisley Park Studios to begin another decade of making music.

That track leads right into "Joy In Repetition", Prince’s bohemian ballad that describes the actions of an enchanting young woman. I like how he delivers the lines in this one, with a mix of longing and aloofness. He shows the power of repetition too.

The Time returns at the start of side three with "Love Machine". This one has a fantastic dance beat to it, and Morris delivers a raspy-rap meant to turn up the heat.

Prince fires off "Tick, Tick, Bang", a rapid-fire number that serves as an ode to orgasms. The track has sweeping sounds that carry the listener along for the ride to its final climax.

The Time is back again with "Shake!", whose organ grind and steady drum tempo brings to mind some of the funkiest throw downs of the late 60’s. This track, along with the other’s here, clearly show that the Time can still come together, after many years of solo projects, to produce some great music.

Prince performs "Thieves in the Temple", a single that, thanks to a great music video, went to number 6 on the Billboard charts in the US and number 7 on the UK charts. This is my favorite track on the album; I just love the exotic feel to it. Listening to it just takes me away for a three and a half minute escape from the every day world.

Side four begins with Prince and the Time together on "The Latest Fashion". The song is okay but not one of my favorites after so many good ones prior to it. Morris’ laugh gets a little on my nerves here too.

Mavis Staples belts out "Melody Cool". As one of the original members of the Staple Singers back in her youth, she brings an old school soul and gospel sound to the mix. She also shows that she still has the power in her voice which the song showcases well. Her appearance helped re-spark her career for a new generation of listeners.

Prince delivers the final ballad "Still Would Stand All Time". The gentle spiritual song is supported by a beautiful piano accompaniment. For me, personally, I would have ended the album on this high note.

The entire cast comes together for the title track "Graffiti Bridge", a rather simplistic and a bit boring song. After so much creativity in the first fifteen tracks, it seems the energy sort of ran a little dry on this one.

The record ends with "New Power Generation (Pt. II)", a musical reprise of the earlier song with a rap performed by T.C. Ellis. I have to say that I am not a big fan of the track and feel it sort of ends the album on a weak note.

I saw Graffiti Bridge in the theatres on its original, brief run. As a fan of all things Prince, I liked it okay. I could see the allegorical themes he was trying to present in the film, but it was probably a little bit too high-brow for most of the audience I saw it with that day. The musical performances were great though.

I purchased this album on vinyl (one of the last I would have gotten in that format as we got our first CD player at the end of 1990) originally and later on CD. Musically, the soundtrack album is a pretty decent mix for the most part. There are only a couple misfires, but that is to be expected with seventeen tracks in total. What gives it an overall consistency is the single-minded writing by Prince on all of the songs.
Posted by Martin Maenza at 8:25 AM