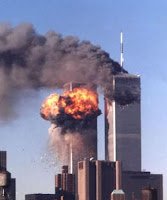 Today marks the tenth anniversary of the September 11th attacks on the United States. Back in 2001, as most people were arriving to work for another day, two planes crashed into the World Trade Center towers in New York City, killing hundreds of people, shaking the American spirit to its very core and forever changing the familiar skyline. Soon we'd learn of another hi-jacked plane on a course for Washington DC, and how the brave passengers risked their own lives to take the plane down before it reached its final objective.

I was working for IBM in Raleigh, NC, at the time. Our organization was still located on Six Fork Road in a trio of buildings. Working in our offices, the word spread up and down the hallways as people picked up the news on their car radios on the way in to work or from taking a break to check an Internet news site or from phone calls from others at home who might have seen the reports on TV.

Management quickly announced they would set up a TV in the breakrooms to the news channels for anyone who wanted to see the reports. They knew we weren't likely to get much work done with so much chaos and uncertainty in the air. Like many, I gathered down on the first floor and stood silently as the images replayed on the TV screen. We all felt that heaviness in the air, and when anyone spoke it was in hushed tones. It was fear, shock, anger, all rolled into one.

I tried to go back to my desk and focus on work, but inevitably my mind just couldn't wrap itself around anything but what was going on. Some folks surfed the Internet for more details. Others gathered at ends of the hall to talk. I found myself going back downstairs time and again to see if the news had more to tell us.

I also remember looking out the windows with thoughts racing through my head. Would there be more attacks? Could the Research Triangle Park area, less than ten miles away, be a target given all the technology companies grouped in one area? What would the next hours or days bring?

I was relieved when no additional attacks came, but I somehow could feel things were not going to be the same any longer. The world that my soon-to-be-six-years-old son was no longer the same secure place I grew up in decades before.

It is my hope and prayer that today, the tenth anniversary, goes by with only instances of rememberance and recollection. The day should honor those who lost their lives that day and the people who helped rescue the survivors. I hope that the authorities are able to squelch any attempts by the evil of the world to use this anniversary as a catalyst for more violence.
Posted by Martin Maenza at 7:59 AM