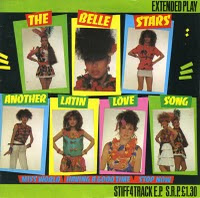 As I noted in a previous blog posting, the Belle Stars were an all-female British band that formed in 1980. In 1983, the released their only full-length album - the self-titled the Belle Stars (to see that review click here). Before that, though, they released a number of non-album singles and then put out a four song extended-play entitled Another Latin Love Song.


Side one opens with the title track. “Another Latin Love Song” has a funky island rhythm to it that instantly takes you to a tropical oasis. I love the steel drums here along with the other percussion; together they give the song a great beat that is perfect to samba to. Ole!

The international flavor continues with “Miss World” with its various Ska elements. Just try to listen to it without having your head start to bop up and down. I think you’ll find it hard to resist.

Side two starts with “Stop Now”. I really like the saxophone on the opening of this one, provided by Miranda Joyce. The Ska vocal-stylings by Jennie McKeown are entrancing too. The lyrics are between two gal pals where one pleads to the other to end a bad relationship before it is too late.

I definitely think the Belle Stars are one of those less known and less appreciated acts from the early days of the alternative/new-wave music scene. I find them rather talented and quite enjoyable to listen to. If you are an 80’s music fan and also like girl-groups and Ska influenced music, the Belle Stars might be just up your alley. Check them out.
Posted by Martin Maenza at 5:24 AM

I remember their song Sign of the times. I would come to know a few more of their songs at that time. Even though I didn't know many of their songs they were a group from the 80's I never forgot.