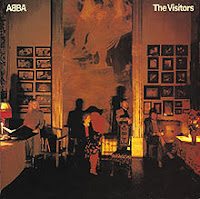 1981 was the year that ABBA released their eighth and final studio album as a group. The Visitors went Platinum in both the UK and Germany; chart-wise it went to number 1 in Germany, the Netherlands, Norway, Sweden and the UK. In the US, the album went to number 29 on the Billboard 200 album charts. The album has a different sound than earlier efforts which garnered them mixed reviews from critics. Lessened are the light pop music influences as the compositions and lyrics tended to reflect more complicated and mature themes. This too was reflective of the turmoil of the personal relationships of the former couples that made up the quartet.


The title track “The Visitors (Crackin’ Up)” opens side one. This third single had a marginal performance on the US Billboard charts, managing to only achieve the position of number 63. The song combines a number of different influences like psychedelic rock, Indian melodies and early 80’s synth rock. I really like how all these influence come together on this track. The lyrics are a political statement regarding the mistreatment of political dissidents in the Soviet Union in the early 80’s.

“Head Over Heels” continues the synth experimentation. The song tells of a well-to-do woman who has extravagant tastes in clothes and experiences while her hapless husband can barely keep up.

“When All Is Said and Done” was the final ABBA single to break into the US Top 40 charts; after eight weeks it peaked at number 27. This song is reflective of the separation and impending divorce that Benny and Frida were going through at the time.

As expected, “Soldiers” features a march-like rhythm as a foundation. The lyrics speak of an awakening “beast” as the military presents a façade of peace and calm. By not referencing a specific event, it helps the song to be open for timeless interpretation.

Side two begins with “I Let the Music Speak”, a sweeping ballad with a bittersweet piano and fluttering orchestration. I think the song would be well fit for a Broadway musical for that is what comes to mind when I listen to this track. It is a testament to Benny and Bjorn’s abilities as writers to create such compelling, complex compositions.

“One of Us”, the first single from the album, went to number 1 in Belgium, Germany, Ireland and the Netherlands and number 3 in the UK. In the US, it stalled at number 107. The song tells of a woman trying to revive a relationship that was long over. I really like the combination of the rhythm and melody on this one; they help to make this one of my favorite track from this album. I can really feel the emotion and regret in the vocals.

“Two for the Price of One” changes things up a bit. The guys take the vocal leads on this one which, along with a more modern pop sound and lyrics about answering an ad that leads to a three-way, yields a rather different kind of song.

“Slipping Through My Fingers” is a song about a mother sending her daughter off to school and realizing how quickly time passes. It really is a reminder of how precious the time is for parents when their children are growing, and how we need to make the most of those innocent years. Too soon they are independent and, if we’ve done our parenting job right, are ready to face the world on their own. I certainly can feel for this song’s message. It seems like only yesterday when I was helping care for our infant son, but that really was nearly sixteen years ago. He’s taller than me now, nearly has his driver’s license, and is starting to think about going off to college in two years. Soon enough the house will be much quieter with only my wife and I left to the nest. Time does slip through your fingers.

A music box melody and the sound of a ticking clock are prominent in the final track “Like An Angel Passing Through My Room”. The song is beautiful in its simplicity, allowing the listener to focus directly on the emotion of the lyrics. It is almost a bittersweet way to end this final studio album from the world-renowned super group. And yet, too, it is sort of fitting.

The 2005 CD reissue of the album included a number of additional bonus tracks, including two Spanish versions of earlier tracks on the record. Some of these tracks like “The Day Before You Came” (with its very detailed analysis of a specific day’s events) and “Under Attack” (with its strong synth sound and effects) were released as singles in 1982.

For some, the Visitors might be too far of a departure of the ABBA sound that they had grown to love in the 1970’s. For me, I find it an interesting evolution of the band in an attempt to change with the times and musical tastes. I wonder how this evolution would have continued had the band found a way to stay together musically to make more albums. Sadly, we’ll never know.
Posted by Martin Maenza at 5:28 AM