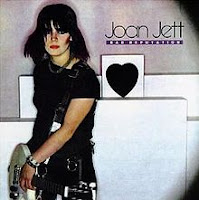 Singer-songwriter-guitarist Joan Jett began her musical career as a founding member of the 70’s rock girl band the Runaways. When the group broke up in 1979, Joan embarked on a solo career and recorded an album independently with the help of Paul Cook and Steve Jones (of the Sex Pistols), Clem Burke and Frank Infante (of Blondie), and Marky and Dee Dee Ramone. That original self-titled 1980 release brought some studio interest; Joan was soon signed to Boardwalk Records.

As 1981 began, the studio re-released that album under the title of Bad Reputation. The record made a decent showing on the US Billboard 200 album charts, reaching number 51. In Australia, the album peaked at number 45.


Side one opens with the title track “Bad Reputation”. The song appears on the B-side of the fourth single from the album. This song is by far my favorite track from the album; I love its rapid-fire tempo and in-your-face attitude. I just have to crank the volume when it comes on. I love to sing this one when my son and I are playing Rock Band, and I love that the song was used as the opening theme for the very amazing and short-lived TV drama Freaks & Geeks.

“Make Believe”, the second single, has a classic girl-group vocal sound to the verses with a steady guitar rhythm. But then Joan growls out the chorus, contrasting that sweetness with pure fury.

“You Don’t Know What You’ve Got” was the third single from the album. Like the first three singles, it did not do much on the charts. For me, it is just okay and not one of the stronger original tracks.

“You Don’t Own Me” was originally a number 2 hit single for Leslie Gore in 1964. Joan’s version, which pays respect to Gore’s by staying fairly faithful in composition and range, was the first single from the album; it failed to live up to its predecessor from a charts standpoint though. It would be the single’s B-side (a little song called “I Love Rock ‘n’ Roll”) that would explode Joan’s career come 1982.

“Too Bad on Your Birthday” has a nice guitar grind to it. Joan’s vocals give the lyrics just the right sneering sentiment.

Gary Glitter first recorded “Do You Wanna Touch Me (Oh Yeah)” in 1973 where it reached number 2 on the UK Singles chart. After Joan hit it big on the charts in 1982, her version was released as a single where it made it to number 20 on the US Billboard charts. This is easily my second favorite track from the record (and not just because Gwyneth Paltrow did a smoking hot version on season 2 of Glee - I loved this song since 1982; Paltrow was only a ten year old then).

Side two starts with “Shout”, a cover version of the Isley Brothers 1959 single. The Isleys’ version has been a party hit since the days of the movie Animal House. Joan kicks the tempo into double-time right out of the gate, making it a real dance workout.

“Let Me Go” is next. It rocks well enough but the lyrics don’t leave a major impression on me.

“Doing All Right With the Boys” is the first track where the guys in the band play a strong part vocally, giving the chorus right out front. This track too was originally done by Gary Glitter, but Joan’s take gives it a different perspective.

The fourth single, “Jezebel”, was the most successful of the singles as it managed to get to number 48 on the US Rock Singles chart. The song is very much about betrayal between two girl friends.

“Don’t Abuse Me” is the one original tune here that Joan penned completely on her own. You can tell from the lyrics that it is the most personal too, and I think that makes the song stronger. I like the piano on this one a lot.

The final track is a cover of the novelty song “Wooly Bully”, first recorded by Sam the Sam and the Pharaohs in 1965 (it reached number 2 on the US Billboard charts). Joan’s version keeps all the quirkiness of the original but spins it nicely for a whole new generation. Again, really like the piano on this one as well.

A lot of people might cry foul with Joan Jett for doing so many covers on her debut record, but I am not one of them. I think Joan has a healthy respect for the roots of rock ‘n’ roll, the music that she grew up on and that inspired her to pick up a guitar. By doing covers, she’s paying homage to those roots. Plus, some songs never go out of style. For all of that, Bad Reputation is a celebration of the past as well as a springboard for the future of Joan‘s career.
Posted by Martin Maenza at 5:23 AM