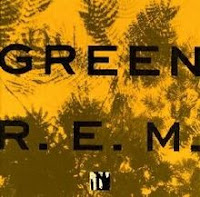 As 1988 was coming to a close, R.E.M. had moved over to the Warner Brothers record label and released their sixth studio album Green. This record also marked changes in how they put together an album - from the band members learning each other’s instruments so they could switch roles during recording to the way the songs were written (starting with lyrics first in some instances).

The record did very well commercially. In the US it went to number 12 on the Billboard album charts and went double-platinum in sales. In the UK, it peaked at number 27 on the charts and was their first album to achieve gold and then platinum sales status.


“Pop Song 89” opens the first side which was labeled as the “Air Side“. This third single released from the album went to number 86 on the Billboard Hot 100 and number 14 on the US Mainstream Rock chart. The up-tempo track seems to mirror a casual conversation of people who have just met at a party or a club.

“Get Up” was the fourth official single from the record. Michael Stipe wrote this one about band mate Mike Mills in response to Mills always over-sleeping before recording sessions. In general, the lyrics urge the listener to stop dreaming their life away.

“You Are the Everything” has a down-home country feel with the sounds of crickets in the background and the prominence of the mandolin.

“Stand” was the second and best selling single from the album. It went to number 6 on the Billboard charts, number 1 on the Mainstream Rock chart, and number 48 in the UK. This song directly challenges the listener to seek out direction and purpose in his life and to act upon that direction rather than just think about it. The video for this one was pretty memorable too, with the band doing this stand-straight-hop kind of dance.

“World Leader Pretend”, an up-tempo political commentary, is next. This was the first R.E.M. song to ever have its lyrics printed on the record sleeve of the album. Stipe said in an interview that it was a song that he clearly wanted listeners to understand. This was a big deal because, back in 1988, we didn’t have the Internet where we could just go and Google lyrics of a song when they were not included with the album. If you wanted to really decipher unwritten lyrics you had to listen to a song over and over again. And with R.E.M., multiple listens is often a requirement indeed.

The mandolin appears prominently again on “The Wrong Child”; it really works complimentary to the lead and backing vocals.

The second side, labeled the “Metal side”, begins with “Orange Crush”. The first single failed to break into the Billboard 200 chart but did go to number 1 on the Mainstream Rock chart and number 28 in the UK. The lyrics tell the story of a young American football player leaving his hometown to go off to fight in the Vietnam War. The title then refers to Agent Orange, a chemical defoliant used prominently during a decade of that military conflict. I get to sing this song often whenever my teenaged son and I are playing Rock Band.

“Turn You Inside Out” was released as a promotional only single in 1989 and it still managed to reach number 7 on the Mainstream Rock chart. This one crawls along at a slower tempo with Stipe’s raw lead vocals.

“Hairshirt” too has a slower tempo but this one goes back to the mandolin to set the tone for the ballad. It allows Stipe to really bring forth the emotions vocally.

“I Remember California” is a slow-tempo look at time in the west-coast state in a dark-brooding way that only R.E.M. can deliver.

The eleventh and final track is actually untitled some refer to it by its positioning as “11”.

This album came out during my first year of life post-college. I had just moved to North Carolina and was working in the computer science field as a programmer for IBM. The songs from Green were popular at the college bars in downtown Raleigh while the hit singles were heard prominently on the radio airwaves. It wasn’t until I got married less than two years later in 1990 that I would come to hear this full album, thanks to my wife who was a very big R.E.M. fan. Blogging has helped me appreciate R.E.M.'s albums a bit more too as I find myself researching the band and the songs to better get a feel for them.
Posted by Martin Maenza at 5:27 AM

One very interesting thing about this album is the artwork. On many copies, the two "R's" on the front (In "REM" and "GREEN") have a slightly reflective "4" on them, only visible if held in the right light. A very fun discovery one day, way back in 1988.

That's something I don't get just by looking at an image on a screen. I have to wonder what the two 4's represent?

According to Wikipedia: " The original pressings of the album and cassette tape covers had the number 4 spot varnished over the R in both "Green" and "R.E.M." In return, "R. Stand" appears instead of "4. Stand" on the track list on the back cover. Allegedly, this was a product of an early typing mistake: due to "4" being a number very close to "R" on the keyboard, "Green" was once misspelled "G4een", and the mistake was adopted this way."

I like to think there exists, a deeper meaning than this

Given that this R.E.M. we are talking about, I doubt they were just "mistakes". They have to have a deeper meaning. I love a good mystery.