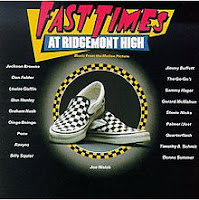 In 1981, Rolling Stone magazine writer Cameron Crowe went undercover to a San Diego, California, high school to research a book. In 1982, that book was adapted into the coming-of-age teen comedy Fast Times at Ridgemont High. The film, which opened in August of 1982, helped launch the careers of young actors Sean Penn, Jennifer Jason Leigh, Judge Renhold, Robert Romanus, Phoebe Cates, Forest Whitaker, Eric Stoltz, Anthony Edwards and Nicolas Cage. At a cost of $4.5 million to make, the film earned more than $27 million at the box office and has since become a TV/cable and video favorite the world over. It even spun off a short-lived CBS sitcom in 1986 that starred young actors Courtney Thorne-Smith and Patrick Dempsey.

The double-disk soundtrack album, released on July 30th of 1982, did fairly well; it peaked at number 54 on the Billboard 200 and several of the songs were released as singles.


Side one opens with "Somebody's Baby" by Jackson Browne. The song spent twelve weeks on the Billboard charts peaking at number 7. It is my favorite track from the entire film as it so much reminds me of high school. The melody, the vocals - the song is pure magic for me.

Eagles member Joe Walsh steps in next with "Waffle Stomp". The song has a heavy plodding to it accentuated by saxophone that yields a neat sound. It gives me a laid back feel of teens just hanging out and watching the world go by.

Another Eagle, Don Henley, explains why "Love Rules". All the elements work perfectly to convey the feelings and mood of adolescent infatuation. Hearing this one I am instantly seventeen again, with those anxious feelings of a first crush - a girl who barely knows I’m alive.

Louise Goffin hangs out with the "Uptown Boys", a sweet mid-tempo track that has hints of 60’s girl-group hits.

Timothy B. Schmit gives us "So Much in Love", a cover of the 1963 number 1 hit by the Tymes. The song is done in a similar acapella style that never gets old.

The Ravyns kick off side two with "Raised on the Radio". I love the opening guitar/drum pacing that sounds like a ticking clock. The vocals start out lower and even but then erupt when they reach the chorus. The sentiment of this song hits home a lot for me since I too feel at times I was raised on the radio, listening to the airwaves and broadening my musical tastes.

Gerard McMahon slows things down with "The Look in Your Eyes". The song really captures those emotions of first love. The vocals are delivered in a yearning manner that brings to mind a young man desperate to make love to the girl next to him in the front seat of his car.

The Go-Go's are "Speeding" next with a quick-tempo tune that you can pogo dance to. This soundtrack came out a year after their fantastic debut album, so their appearance here with an all-new track certainly would have helped sales.

Quarterflash, another band who had a big debut the year prior, delivers the heartfelt "Don't Be Lonely". Rindy Ross’ vocals give a longing female perspective to balance that of Gerald McMahon’s a few tracks prior.

Don Felder, one of the Eagles’ guitarists, goes solo here with "Never Surrender". It has a slightly harder rock edge to it, and his guitar lays down a very nice groove.

Side three begins with a pair of tunes that take their titles from the film. The first is Billy Squier's "Fast Times (The Best Years of Our Lives)", a funky-rock track that is very much in line with his earlier big hits “The Stroke”, “In The Dark” and “Everybody Wants You” from the year prior. His guitar style is very distinctive.

The other is Sammy Hagar's "Fast Times at Ridgemont High", with a heavy and equally distinctive guitar riff. Listening to the lyrics, you can clearly tell that Sammy was privy to seeing a rough cut of the film to pen this one. It really does fit the movie well.

Jimmy Buffett delivers the tune "I Don't Know (Spicoli's Theme)", which is a bit different than his usual fare. It has a more modern spin to it thanks to the synth keyboards and harder rocking sound. I enjoy that the lyrics evoke all the elements of Sean Penn’s stoner character “Jeff Spicoli” to a tee.

Graham Nash’s "Love Is the Reason" is next. It has that nice California rock sound going for it.

Another California band, Poco, is here also with "I'll Leave It Up to You". The song has an up-beat bouncy-pop sound to it.

Donna Summer takes off with side four and "Highway Runner". The song has a more rocking sound to it, a fry cry from her 70’s disco style.

"Sleeping Angel" is the folksy kind of ballad that one would expect from Stevie Nicks. I have always been a fan of her vocal inflections, so beautiful and so raw.

Palmer & Jost kick up the beat with "She's My Baby (And She's Outta Control)". I can barely keep my feet still when I listen to this one.

Oingo Boingo closes out the record with the fitting "Goodbye, Goodbye". This is a great track with its call/repeat vocals that get faster and faster - until the repeaters can no longer keep up with Danny Elfman's speed. It runs over the credits of the film.

Much to the dismay of the fans of the film, there were five songs used in the movie that did not make the soundtrack. These include the rock classic "Kashmir" by Led Zeppelin, the holiday favorite "Jingle Bell Rock" by Bobby Helms, the amazing "Moving In Stereo" by the Cars, and chart-toppers "We Got The Beat" by the Go-Go's and "American Girl" by Tom Petty and the Heartbreakers. Also the band that played during the prom did cover versions of "Life in the Fast Line" by the Eagles and "Wooly Bully" by Sam the Sham and the Pharaohs.

Fast Times at Ridgemont High came out between my junior and senior years of high school and thus is a very core part of my teenaged years. As a student, I could completely relate to the situations in the film. Cameron Crowe clearly captured many universal experiences of the American high school student in the early 80's. But it was more than that.

The dialogue of the film includes some of the most quotable lines of that year. During the summer of 1984 when I was working in the freezers of an ice cream manufacturing plant, my buddies and I would constantly recite full scenes from the film to pass the time while we stacked half-gallons ten rows high on wood pallets. Fast Times really helped us pass the time on those eight hour shifts.

Finally, the music on this soundtrack was a solid snapshot of what was going on over the airways at the time; even if all the tracks weren't getting airplay they were similar to what was. For me, there are a lot of under-appreciated songs on this one. That makes Fast Times a worthwhile album to listen to every now and again.
Posted by Martin Maenza at 8:26 AM