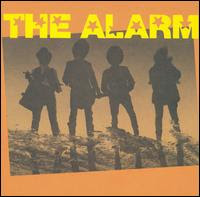 The band from North Wales known as the Alarm have been together since the late 1970’s; the primary members of the group are Mike Peters, Dave Sharp, Eddie MacDonald and Nigel Twist. They first started out with a mod sound but eventually moved to a more alternative rock sound in the early 80’s. Their music is very much influenced by the Welsh culture where they grew up. Some would draw comparisons between the Alarm and U2 as they come from similar backgrounds, have similar sounds and have lyrics directed at activism; for me personally I prefer the Alarm (they are certainly more represented in my iTunes library).


In 1982, the Alarm began to record demos for various record labels. IRS Records eventually signed the group and worked with them to release their self-titled 1983 EP the Alarm in July of that year. The record, consisting of five tracks in total, did not make the UK album charts yet in the US it did reach number 126 on the Billboard 200 charts.

The first side opens with “The Stand”, a song inspired by the Stephen King novel of the same name. It captures the post-apocalyptic mood of the 1978 book and follows the travels of the character Randall Flagg. I find myself singing along with the chorus on this one every time; I think it and the music all work very well on this very underappreciated 80’s track. This was the second single ever released by the band and the first to ever break onto the UK charts (it went to number 86).

“Across the Border” with its driving guitars is a commentary on the violence going on in Ireland in the late 70’s and early 80’s. Through the lyrics, the band is pleading for the sides to seek a peaceful solution rather than just drive up the number of casualties.

Side two charges in with “Marching On”, a track also released as a single prior to the EP. It failed however to make much of a dent on the charts on either side of the pond. The song is very much an anthem for the youth of the day to make their voices heard through organized but peaceful demonstrations like marches and such.

“Lie of the Land” is too a song of hope and optimism. I love the harmonica on this one. It adds a nice touch to the band’s overall sound.

The final track is a live version of the song “For Freedom”. I like it because it gives you a glimpse of the band in their element, a reflection of their many years of doing gigs while trying to get that break. It also shows that the band sounds equally amazing both in the studio and in concert.

The Alarm did a lot of touring in the US that summer to support the EP. They also appeared on shows like American Bandstand and The Cutting Edge as well as having videos appearing on the still new MTV channel. All of this promotion would eventually lead to a full album, 1984’s Declaration (the topic for a future review).

For me, it was college radio that first introduced me to these songs and the band. I was an instant fan after hearing “The Stand”. Over my college years, I would still hear of the band through new releases and singles. A few years ago, when I joined emusic.com and was getting into the whole digital scene, I purchased a number of their re-mastered albums that included many additional tracks like B-sides and live versions. My enjoyment of the Alarm’s body of work has grown even more so since then.

Really though, it all started with these five tracks on this the Alarm EP.
Posted by Martin Maenza at 5:23 AM