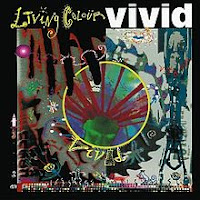 Not to be confused with the sketch comedy show featuring the Wayons Brothers that was on the air in the late 80’s, Living Colour was an African-American band from out of New York City that formed in 1984. The line up consisted of Vernon Reid on guitar, Muzz Skillings on bass, Will Calhoun on drums and Corey Glover on vocals. Their music took elements of jazz, funk, hard rock and heavy metal to create an interesting musical blend. Their lyrics had a mix of political and personal topics.

In 1988, Living Colour released their first studio album Vivid. The record sold very well and went to number 6 on the US Billboard 200 charts. They supported the album as the opening act for the Rolling Stones on the “Steel Wheels/Urban Jungle Tour”. They won a Grammy Award for Best Hard Rock Performance in 1989 and were also named the Best New Artist at that year’s MTV Video Music Awards. Rolling Stone magazine ranked the album at number 64 on their Top 100 Albums of the 1980’s list.


Their smash debut hit single “Cult of Personality” opens side one. The song spent nine weeks on the Billboard singles charts, reaching the number 13 position; it also went to number 9 on the Mainstream Rock charts. The song, which helped the band with their Grammy Award, addresses the mix of politics and psychology when it comes to certain charismatic figures such as Mussolini, John F. Kennedy, Stalin, and Gandhi. I really find the bass line and drums on this one to be very moving; the music grips you firmly by the chest and shakes you to your core.

“I Want to Know” goes a more traditional rock route with a probing song about a woman’s true feelings. The vocals on this one are less harsh and more welcoming.

The opening of “Middle Man” harkens back to some of the great 60’s and early 70’s rock. The lyrics tell of a man who doesn’t want to be a leader but instead wants to work as an agent to bring two sides together.

“Desperate People” kicks the pace back into high gear with a rapid fire tempo that eventually settles into a grinding groove.

“Open Letter (To a Landlord)” was the second single released from the album. While it failed to crack the Billboard Top 40 (it peaked at number 82), it did go to number 11 on the US Mainstream Rock charts. This track opens slowly before turning up the beat. The song looks at urban decay and how it affects the people who grew up living in these poor neighborhoods.

Side two starts off with “Funny Vibe” with a guest appearance by Public Enemy’s Chuck D and Flavor Flav to provide additional vocals and raps.

“Memories Can’t Wait” was originally written by David Byrne and appeared on the Talking Heads’ 1979 album Fear of Music. The cover by Living Colour has a much harder edge to it than the original.

“Broken Hearts” has a nice, slower swing to it. It has a blues quality to it that shows another side to the band.

Mick Jagger of the Rolling Stones produced the “Glamour Boys” and also provided backing vocals on the track. This single spent three weeks on the Billboard singles chart, reaching number 31. It also got to number 26 on the Mainstream Rock charts. The song discusses a breed of young men who are fixated on the many aspects of high society, including fancy clothes and extravagant parties. It is my favorite track from the album; I really like the playful rhythm and the overall delivery on this one. The video was one that stuck in my head too with the guys with the plastic Ken-doll heads. Freaky.

“What’s Your Favorite Color? (Theme Song)” transitions from a metal opening to a full-on-funk groove. This track is very danceable thanks to an unforgiving bass line that brings to mind classics by Chic.

The record ends with “Which Way to America?”, a fast-tempo track that tries to rationalize the differing views of the state of America in the late 80’s. It clearly challenges the media for its portrayal of only certain aspects of American culture and certain economic classes. The guitar solo midway through burns with white-hot intensity.

I had Living Colour’s Vivid on cassette, having purchased it during my first year working post-college. I was inspired by the music videos of the band playing on MTV - they were something that was new and interesting. Listening to this album again today, twenty three years later, I find it still very fresh and contemporary. The band has a good rocking sound and the songs are very well composed and produced. I have already added the remaining tracks to my digital music library so I can continue to enjoy this album for years to come.
Posted by Martin Maenza at 5:19 AM

The world never knew how to accept "Cult of Personality" back then. It was so unexpected, so rock. It still is, in spite of being a bit overplayed at times on rock radio throughout the years that followed. great review.

Thanks for your comments. I agree - the album, the band and the song were something different back in the day but I think that worked to their advantage. It gave them something that stood out from the pack.

Middle Man was actually their debut single, it wasn't until a year after Vivid's release that MTV and fm radio started playing cult