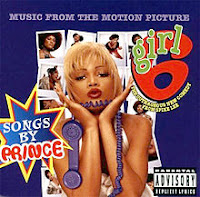 For the soundtrack album, Spike Lee tapped Prince for contributions. What resulted was a mix of previously released material from the Prince family of stars as well as a few original tracks. Unless otherwise mentioned, the tracks were performed by Prince.


The CD kicks off with "She Spoke 2 Me", a jazzy track that he recorded with the New Power Generation in 1992. His falsetto vocals are complimented nicely by the NPG horn section.

"Pink Cashmere" was first released in 1993 and went to number 50 on the US Billboard chart and number 14 on the US R&B chart. The song was written by Prince for his then-girlfriend Anna Garcia for her 18th birthday. The title refers to an actual custom made coat he gave her as a gift. I like the smooth vocals on this one.

"Count the Days" comes from the New Power Generation's 1995 album Exodus. The group was the backing band for Prince in the late 90's; he wrote a lot of their material including this bluesy ballad. The lyrics describe negative situations in life while the title refers to counting the days until things get better.

"Girls & Boys" comes from Prince's 1986 film soundtrack for Under the Cherry Moon. The song is very funky with a combination of live drums (by Bobby Z and Sheila E.) and a drum machine. Eric Leeds also provides some sexy saxophone on this track. Hearing this one always gets me in the mood to dance.

"The Screams of Passion" comes from the self-titled 1985 debut album by the Family. This group was made up of friends and collaborators of Prince's: St. Paul Peterson, Susannah Melvoin (Wendy's sister), Miko Waver, Eric Leeds, and former members of the Time Jellybean Johnson and Jerome Benton. I am a big fan of this group and this song in particular. I love the mix of musical elements on this one, creating a sort of funky romance novel feel to it.

Next up is "Nasty Girl" by Vanity 6, which previously appeared on the Vanity 6 album in 1982. This classic song was also used in the films Beverly Hills Cop and Private School. The opening rhythm with hand-claps sets up the slow-grind groove as the gals graphically detail what they want in a night of sex. The song fits well with this film's overall subject matter.

The next three tracks come from Prince's 1987 Sign O' the Times album which I have reviewed previously.

"Hot Thing" is about pure lust. The drum line and Prince‘s delivery of the two-word title repeatedly drive that emotion home. This is another great song to dance to, especially with the bass reverberating from the speakers. I remember it being very popular in the clubs at the time

"Adore" is moving ballad that describes the adulation one lover has for another. Prince delivers it in his signature falsetto. The horns give the song a nice bluesy sound.

"The Cross" is a beautifully spiritual song. It starts simple with voice and guitar delivering the first verses. The steady drumbeat joins in for the second verse. The song then explodes in a fashion similar to Jimi Hendrix for the second half. This one really rocks.

"How Come U Don't Call Me Anymore?" was originally released on B-side of the single "1999" back in 1982. This song is an excellent slow-jam with a bluesy piano accompaniment. In his falsetto voice, Prince inquires as to why his lover no longer phones him (though I can hardly imagine that ever happened to him personally). Alicia Keyes had much success with her cover of the song for her 2001 debut album Songs in A Minor.

"Don't Talk 2 Strangers" was originally recorded in 1992 as a proposed track for the soundtrack of I'll Do Anything. When the song was not used, it sat in the vaults until it resurfaced for this project. This piano ballad is also sung in falsetto. Chaka Khan later covered the song for her 1998 Come 2 My House album.

"Girl 6" by the New Power Generation was the only track released as a new single from this album. The funky groove incorporates a number of hip-hop elements including samples of dialogue from the film and former Prince hits. The song was meant to represent the lead character from the film.

I have not yet seen the movie Girl 6. I recognize that Spike Lee makes some amazing films that really make you think; I have just never really gotten into them. Perhaps someday. But this soundtrack was one I definitely picked up on CD, being a huge fan of all things Prince. At the time, it was my only source to get those new and unreleased tracks. And as for the previously released tracks, many of them were already favorites of mine from a number of 80's albums. It was interesting to see them placed together into a new context here.
Posted by Martin Maenza at 7:30 AM