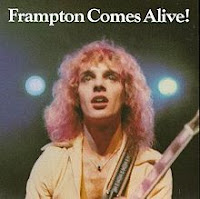 After four solo albums with marginal sales and chart success, Peter Frampton released a double-disk live record that finally hit the mark. Frampton Comes Alive! went to number 6 on the UK charts and number 1 in Canada. In the US the album spent ten weeks (ten percent of its incredible 97 weeks on the US Billboard Album chart) at the number 1 spot and was certified multi-Platinum. Of course, it helped that the record company reduced the price on its release to $7.98, only a dollar more than the standard price of $6.98 that most single disk albums went for in 1976. Who couldn’t resist a bargain, especially during those tight economic times? As no surprise, Rolling Stone magazine’s readers voted it the “Album of the Year”.


Side one starts with “Something’s Happening”, the title track from his fourth album from 1974. It has a pretty standard concert opening to it - okay but not stand out.

Also from that fourth album comes “Doobie Wah”. I like the funky riffs in this one.

“Show Me the Way”, originally from the 1975 Frampton album, was the first single from the live release and Frampton’s first foray into the Billboard Top 40 in the US. In its fourteen week run, it peaked at number 6. This track is easily my favorite song from the album; it is one I know by heart and sing along to.

“It’s a Plain Shame” comes from Frampton’s first studio album, 1972’s Wind of Change. This one moves back to a more rocking beat which is a nice change-up.

Side two opens with “All I Want to Be (Is By Your Side)”, also from Wind of Change. Where side one was full on rocking, this side brings it down with a nice acoustic mini-set. I like this song’s gentle, loving tone.

“Wind of Change”, of course, is the title of Frampton’s first studio album. This one has a nice simple arrangement, allowing him to focus fully on the emotion of the lyrics.

The second single, “Baby, I Love Your Way” (also from Frampton), spent eleven weeks on the Billboard charts and got as high as number 12. This is another track I sing along to a lot; it is a classic that got a lot of air-play both in its original run and years afterward on the album-oriented rock stations. It definitely takes me back to the summers of the late 70’s when you could hear this one playing all over the Point as people hung out and picnicked. I can almost smell the charcoal in the air.

“I Wanna Go to the Sun” originally appeared on Somethin’s Happening. This one has a nice piano foundation to it.

Side three cashes in with “Penny for Your Thoughts” from Frampton. The song is a short acoustic instrumental number. It has a nice, old fashioned feel to it. Keeping the theme, of sorts going, next is “(I’ll Give You) Money”, also from Frampton. The two songs also are back to back on that album so it is not surprising they are that way here. I like the harder rocking edge the later has - really the first hints of that on this album.

The harder rock continues with the next track. “Shine On” was a single from Frampton wrote and performed originally with his former band Humble Pie in 1971.

Next up is a cover of the 1968 Rolling Stone’s classic “Jumpin’ Jack Flash”. Frampton first recorded it on Wind of Change. While I can appreciate his version (hey, I could finally understand the lyrics clearly and the extended live jam injects some funk into the mix), he lacks the vocal attitude that Mick Jagger gives the song and thus this one pales in comparison to the original.

The fourth side only has two tracks but they are monster jams that originally came from his second album Frampton‘s Camel from 1973.

First up is “Lines on My Face” which clocks in at seven minutes. The song is a very introspective ballad; this version has some very mellow yet also very cool instrumental solos to it.

The album closes with the epic “Do You Feel Like We Do?”, a fourteen and a half minute number. The song takes the original nearly seven minute version from 1973 and slows the tempo down a bit to give it a grander, epic feel. For me, personally, I think this one goes on a bit too long. But I am sure deejays on the album-oriented rock stations loved it (they played it often enough) - gave them plenty of time for a bathroom or cigarette break. The single version, very much edited, spent ten weeks on the Billboard charts and reached number 10.

Having an older brother in high school at the time it was released, I heard a lot of Frampton Comes Alive! through the bedroom walls, in the car when he was driving me around town, etc. Like most people, he had the live set that really served well as a “best of” compilation from Frampton’s first four albums, with the added uniqueness of a live set to make it more interesting.

I really got into Peter Frampton’s music at about this point in the 1970’s and followed his next few albums after. I have this one in my digital collection and like most of it; I last listened to it about a year or so ago. I haven’t been inclined to seek any of those first four albums before now, being so familiar with the live versions, but I think I just might do that. It would be good to hear the original takes on these tunes. Looks like for less than twenty bucks (on emusic.com) I can download all four of the albums from which thus tunes came. That’s a pretty good deal.
Posted by Martin Maenza at 8:38 AM

Frampton's career definitely peaked with this live album (although I liked the song "I'm in You" from the subsequent album).

Cheap Trick is another band who made the most of a live LP.