Steve Winwood - Arc of a Diver 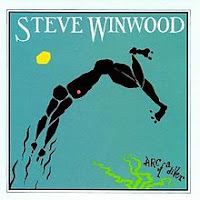 Singer/keyboardist/guitarist Steve Winwood was the lead singer of a number of bands (the Spencer Davis Group, Blind Faith, and Traffic) during the 60’s and 70’s before embarking on his own solo career in 1977. His second solo album Arc of a Diver in 1981 went to number 13 in his native UK’s charts and number 3 on the US Billboard 200 charts.


Side one opens with the smash single “While You See a Chance”. This first single from the album was Winwood’s first solo hit to break into the Billboard Top 40 in the US, spending twelve weeks on the charts and reaching the number 7 position. It went to number 45 on the UK Singles chart. I really like the keyboard opening on this one which, in fact, was not originally intended to be part of the song. Winwood accidentally deleted the planned drum track intro and wrote the keyboard one at the last minute to replace it. I think it sets the optimistic tone of the song nicely.

The title track “Arc of a Diver” is the next track and second single. While it went to number 11 on the US Mainstream Rock charts, it went to number 48 on the Billboard 200. Where the first track was very pop-rock, this one has more of a soul-groove to it that is supported by a nice synthesizer track. I think the combination is very smooth.

“Second-Hand Woman” has a solid dance beat to it, sounding very much like a hold-over from the disco days of the late 70’s. Hearing it makes me want to break out the bell-bottom pants and platform shoes to get my groove on. I like it.

Winwood slows things down with the sad and introspective “Slowdown Sundown”. I like the combination of instruments on this one; together they paint just the right portrait for this song. I especially like the organ in the later part of the track.

Side two waltzes in with “Spanish Dancer”, a funky and almost mystical jam. It is a song that makes you feel like you’re experiencing something enlightening.

“Night Train”, the third single from the album, only reached number 104 on the US Billboard charts. This one rolls down the rails on a pumping funk groove for nearly eight minutes. This is easily my favorite of the deep-tracks from this album.

Winwood slows things down for the final track “Dust”. This ballad hits those personal and emotional points well without coming across as sappy or sickly-sweet. It feels heartfelt.

I like that with Arc of a Diver Steve Winwood covers a lot of ground over the course of just seven tracks. The songs are varied and do not tend to sound repetitive at all. I think it helps that he has such a diverse musical past to draw from and that translates into the music on this record. I like too that he really allows the songs the space to breathe and flow. I’d rather have seven solid tracks, as this album has, rather than ten or more shorter ones that come across as not fully baked.

If you’ve never heard this album before, I’d heartily recommend it. You might feel, as I do, that there are a few tracks that need to be added to your music library.
Posted by Martin Maenza at 5:23 AM

Getting very personal here, but “While You See a Chance” encouraged me, though years after its release, take a chance on a long term relationship that didn't work out. But I still hear the song with a smile I suppose. Strangely, I found a cassette copy of this album deep inside the house where I now live, many years after it all. great review.

Thanks for getting personal. I like when my readers share what the songs and albums mean to them. It is the music that helps provide the soundtrack to our memories, all kinds of memories.