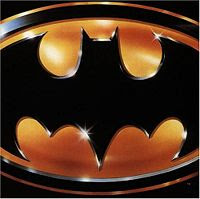 With so many super-heroes flying about the box office this summer, I thought today we'd take a look at an earlier film of this genre. In 1989, Warner Brothers studios tapped Prince to do music for their upcoming Batman film starring Michael Keaton (as Bruce Wayne/Batman), Jack Nicholson (as the Joker) and Kim Bassinger (as reporter Vicki Vale). The hope would be a cross-company marketing move to bring together one of their music legends with one of the biggest comic book franchises. The result was this Platinum selling soundtrack album that went to number 1 on the US Billboard 200 and R&B Album charts and number 1 on the UK album charts too.


The songs on the album feature snippets of the film's actual dialogue interspersed. The idea was that the songs on the record were "sung" by characters in the film, giving the whole package an overall theme of sorts. Besides Bruce Wayne/Batman, the Joker, and Vicki Vale, a fourth persona of "Gemini" appears, a hybrid of Batman and the Joker (an individual gripped with the battle of good versus evil) in one soul. "Gemini" appears in a number of the music videos from this album.

Side one opens with "The Future" which has an urban, gritty feel to it - something that had not been present in previous Prince songs up to this point. He also includes a funky bass line and a thumping groove too that makes the song pop. Taken out of context from the film, I find the song works as a nice social commentary.

"Electric Chair" was an earlier penned track that Prince brought into the project. The lyrics have a darker slant and the music has a thundering, rock sound that seemed a perfect match for the madness of the villainous Joker. Combined with the first track, I think they reflect the tone of the film well. I enjoy Prince's punch-delivery of the lyrics on the verses and the shredding guitar chords that bring to mind his work back on Purple Rain.

"The Arms of Orion" is a duet between Prince and Sheena Easton; the two had a close working relationship for a number of years in the later part of that decade. This third single from the album went to number 36 in the US and number 27 in the UK. The slow love ballad is mostly supported by a simple piano accompaniment, though a synthesizer is used to simulate the string instruments. I think this song would make a great karaoke number for a couple to perform as the lyrics are wonderful and poetic.

"Partyman" was the second single which hit number 18 in the US and number 14 in the UK. It is also one of the few songs from this record that was actually featured prominently in the film (it was used in the scene with Joker and his henchmen trashing the art museum). The vocals are done in Prince's "Camille" style, a voice achieved by speeding up his own vocals. This song was my jam back in the summer/fall of 1989 as it has a great beat, a funky groove and a pounding piano line. I loved dancing to it out in the clubs, especially the extended dance mix version. The music video (which has its own storyline) is one of my favorites of the late MTV video era.

"Vicki Waiting" opens with a phone ringing. This is another revised tune for the film. I like the tempo as it is on the off-beat, giving it a different feel to its pace.

Side two starts with "Trust", the other song featured in the film directly (this one was used in the scene where Joker's parade float disperses free money and toxic Joker-gas to the crowds of Gothamites). This is a festive, up-tempo song that gets my feet tapping and heart pumping every time. It would make for a good workout song. The lyrics talk about the bond between two in a relationship and how much trust is needed.

"Lemon Crush" has a bouncy, industrial groove to it. The lyrics have a sexual aspect to them, though after all these years I still am not 100% sure what "lemon crush" implies. The urban dictionary says it means when a man has a crush on a woman who is in fact a lesbian, but that doesn't seem to fit the lyrics that well.

"Scandalous" is a slow, smooth ballad that Prince had written previously but brought to the project. It seemed to fit with the film well, complimenting "The Arms of Orion" to represent the complex romantic relationship developing between Bruce and Vicki. The 12 inch single is labeled "the Scandalous Sex Suite", featuring a three act movement. That version is very erotic but the album version is not slouch either. As past albums can attest, Prince is a master when it comes to songs like these and most albums feature at least one of this type of song. Call it a signature element of his, if you will.

"Batdance", the first single, is the final track on the record. This dance smash went to number 1 on the Billboard single and the R&B single charts, and number 2 in the UK. Ironically, the song was a last minute replacement on the album for another, darker track. "Batdance" ended up being a hybrid tune that incorporated parts of seven other Prince songs (some released later, some still in the vaults) as well as dialogue from the film and the 1966 "Batman Theme" by Neal Hefti. Despite all that, the song turned out great and ruled the clubs and airwaves for a short period of time. For me, this was another dance favorite in the summer of 1989. The video is all kinds of crazy too, with multiple Batmans, Jokers, and Vickis dancing about the Batcave while Prince, as "Gemini", orchestrates it all.

When this record came out in 1989, this was really a slam-dunk for me. I had been a reader of super-hero comic books, including Batman, for over half my life at that point. And my love of all music Prince was never in question. So the Batman movie and album were a win-win for me. I owned a copy of this album on vinyl and cassette; I also had a number of the 12 inch singles (for the trio non-album track B-sides - the highly danceable "200 Balloons", the very funky "Feel U Up" and the stripped-down ballad "I Love U In Me"). Today, I have a CD copy of the album (to replace the long gone older formats) which of course was burned into my iTunes library.

The Batman soundtrack is still a favorite of mine, twenty two years after its release. It easily makes it on to my Top-10 Prince albums list without hesitation and dances very close to the top 5 of that group.
Posted by Martin Maenza at 8:44 AM

Great post Martin! Well, I've told you I'm not the music fan you are, but as you know we do share the love for all things Batman & this was the only "Prince" album I've ever owned--I remember at the time feeling disheartened that Michael Keaton was playing him, and Prince was doing these songs, but everything turned out terrific; hey do you know they're filming the new Batman movie in my town right now?? Never thought I'd be seeing on the local news that my bus route's been rerouted because the Batman's fighting Bane... :)

Doug, thanks for the comment. Always glad to hear from you. I did not know the new Batman flick was filming in your town. Cool!

Nice review. I remember working at a girl's camp one summer back in 89 up in New Hampshire. One night I hit the beach for a rock show by the band "The Outfield" as their album "Voices of Babylon" was getting radio airplay. The venue, which used to be called 'Club Casino' had a very large video screen, and before the show they played the video to "Batdance" with full on loud fury. Pretty cool back then.

Two years later found me driving on an interstate to some volunteer work in my newly acquired but used SUV. Suddenly, a large "CRACK!", some screeching and my ride was disabled. The transmission had completely fallen apart.

I'll never forget the song that I was jamming to at that very moment:

I can still here Jack's Joker laughing as I coasted to the side of the road.

10DD, wow - two very distinct and stark memories from the same song. Thanks for sharing them here.