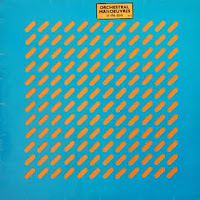 The UK synth-pop band many refer to as OMD put out their self-titled debut album Orchestral Manoeuvres In the Dark in 1980. The album did very well on the UK charts (peaking at number 27). The record was slightly retooled for the 1981 US release under the same name - compiling tracks from both this record and the band’s second UK release Organisation. I’m going to review that US release as that is the version I am most familiar.


Side one opens with “Enola Gay”. When released as a single, it went to number 8 in the UK. In the US it managed to chart on the Dance Play charts at number 34. The title comes from the name of the USA Air Force jet that dropped the atomic bomb on the Japanese city of Hiroshima in 1945. The lyrics directly address the decision to use the bomb during World War II. Also, at the time of release, there was a controversy surrounding British Prime Minister Margret Thatcher’s decision to allow the US to station nuclear missiles in the Britain. So, the song is relevant on two fronts. I really love the synth on this record, the way it echoes across the speakers. For such a serious song, it has a great up-beat dance tempo to it.

“2nd Thought” is appropriately second. It opens with very ominous, echoing tones that set the mood for the track.

“Bunker Soldiers” moves back to the up-tempo rhythm even though the subject matter is hardly up lifting. The song is about soldiers who fight war in the trenches. I find the letter/number sequences that serve as the chorus to be quite interesting (the letters in the left speaker, the numbers in the right). I need to do a bit more research to see what they are supposed to mean.

“Almost” was the B-side release to the next track. The synth sounds like steam being released from a radiator valve, an interesting choice that seems to work. They provide a regretful, wistful sound that seems to match the tone and delivery of the lyrics.

“Electricity” was actually released as a single in 1979 but didn’t make much of an impact. It was re-released a year later and went to number 99 on the UK singles charts. The synth on this one is amazing too, from the arcing electrical bolts at the beginning to the plunk-plunk rhythm that reminds me of a xylophone. The lyrics make a social commentary on our dependence of modern energy sources and the need to find alternatives.

“Statues” has an interesting rhythm to it which is brought out more by the lines that are only three or four syllables each. The instrumental break before the final verse is also a nice change up. I like how the band was experimenting with sound and song structures here.

Side two begins with the ominous sounding “The Misunderstanding”.

“Julia’s Song” has an interesting swing to it. What I really find nice about this album is that each song sounds different from the one before it. It shows the band has many different influences at work and that they like to play with sounds and rhythms. I think that allows them the opportunity to appeal to a wider audience.

“Motion and Heart” has nice saunter to its rhythm, a confident swagger if you will. I like the piano on this one, very clear and concise, as well as the organ sounds. It is a nice change up from pure synth sounding keyboards.

“Messages” went to number 13 on the UK singles charts and number 67 on the US Dance Play charts. The song tells of a couple that has broken up and of those awkward written communications that follow afterwards. The song has a bittersweet mood to it.

The album closes with “Stanlow”. The opening sounds remind me of the pistons of some industrial machinery, keeping steady pace. This is contrasted by somber sounding music and vocals. Stanlow actually is the name of an oil refinery in Cheshire, England.

When this album came out in the States, I was still in the middle of my high school years. I had just gotten into alternative music thanks to the local college radio station. That was where I would first hear some of these songs by OMD. In listening to this entire album today, there are definitely a few more of the deeper, non-single tracks that I am planning to add to my music library in the near future. After all, one who loves the 80’s can never have too much synth-pop music, right?
Posted by Martin Maenza at 5:31 AM

I haven't listened to this album in decades, but "Almost" still holds a warm spot in my heart.