Rick Astley - Whenever You Need Somebody 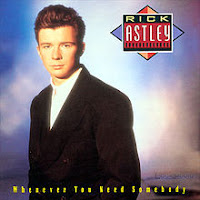 
Side one opens with “Never Gonna Give You Up”, the first single from the album. The record was a smash hit, going to number 1 in the UK, the US, Canada, Australia, Germany, the Netherlands and Sweden. Rick’s solid vocals and clean cut image from the music video further helped to make the song very accessible to listeners of all ages. The song also has a very danceable beat to it that made it very popular in the clubs back in the day. I can recall dancing to this one many times during early 1988. Decades later, the song gained new notoriety as part of “Rickrolling”, an Internet link fake out made popular in 2008.

The title track “Whenever You Need Somebody” is next. The song was originally recorded by another SAW artist, the female singer O’Chi Brown; her version was a minor hit in the UK in 1985. Rick’s version, the second single, was released only in Europe; it went to number 3 in the UK and number 1 in Switzerland, Germany and Sweden. The song continues the same combination of the first track - dance beats and pitch-perfect vocals.

“Together Forever”, the fourth single, went to number 2 in the UK, and number 1 in US and Canada. The musical chord structure and melody on this song is very similar to “Never Gonna Give You Up” which made for mixing the two songs together by club deejays fairly easy. I think of these opening tracks I like this one the best. I find myself singing along to when it comes on the radio or my iPod.

The fifth single “It Would Take a Strong Strong Man” went to number 1 in Canada and number 10 on the US Billboard Hot 100. The tempo is a little slower than the previous three tracks and the music a little less over-produced. I think the song has a nice beach music feel to it which derives a lot of elements too from classic R&B songs.

“The Love Has Gone” is another slower track but still with a steady beat to it. The song is a good ending for a solid first side of pop music.

Side two begins with “Don’t Say Goodbye” with the return of the dance rhythms. It is a straight-forward love song.

“Slipping Away” doesn’t allow the rhythms to slip away. The one has solid horns along with a funky bass riff that I like a lot.

“No More Looking for Love” does not stray from the formula that has worked so far on this album. Once more, we get an up-tempo dance track with steady drums and a supportive bass line.

“You Move Me” has a bit more of a synthesizer presence, especially on the opening. The rhythm too is a bit different from the earlier ones; it has a more chop-chop attitude to it that is a nice change of pace.

Released only as a single in Europe, “When I Fall in Love” went to number 2 on the UK charts. This song was originally recorded in 1952 by Doris Day. Others who covered it include Nat King Cole, Johnny Mathis, the Lettermen, the Carpenters and Kenny Rogers. Rick’s version draws a bit more from those earlier versions and includes full orchestration that includes a harp and strings. I think his vocals are easily up to standing along side all those greats before him.

Some might dismiss Rick Astley's songs as lame pop music. I disagree totally. Yes, the production is slick and polished, but Rick’s vocals are a big part too of what sold these records. As sales would show, I’m not the only one who thought he had a very good singing voice.

I picked this album up on vinyl back in early 1988 after the first singles started to hit the airwaves and the songs became popular in the clubs. I found them to be up-beat, positive, and, of course, very danceable. That last criteria was a very important one for me in the mid-to-late 80’s as I was spending a lot of my night’s post-college out dancing.

Listening to Whenever You Need Somebody again twenty three years later on my iPod, it brings me right back to that time in my life. I was just out of college, working at my first job in my chosen career field and establishing myself on my own. I was living hundreds of miles away from the state where I grew up, and making new friends in the apartment complex and as a member of the Raleigh Jaycess.
Posted by Martin Maenza at 5:26 AM

Email ThisBlogThis!Share to TwitterShare to FacebookShare to Pinterest
Labels: 80's, music, Rick Astley, Whenever You Need Somebody

I remember Rick well. The big "Barry White" voice coming from a little white red headed English Gent. Rick had talent, and he also had style. He was a great sport with the "Rick Rolling" as well, the Macy's parade of 2008 was great.

I totally agree on all of your comments, my friend. Amazing voice, style and sense of humor.