Oingo Boingo - Only a Lad 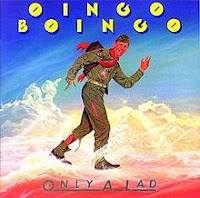 Founded as a performance art troupe in 1972 (they actually appeared on the Gong Show in 1976), the Los Angeles group known as Oingo Boingo transitioned into a ska-influenced New Wave band in 1979. Lead by singer-songwriter Danny Elfman, the eight man band released a self-titled four song EP in 1980 and then their first full-length studio album Only a Lad on June 19th of 1981.

Their albums were hardly high charters or mega sellers even though their career as a band ran until 1995. This one spent five weeks on the US Billboard Album chart, peaking at number 172. Thanks to their quirky sound and off-beat view of the world, Oingo Boingo developed a dedicated cult following.


“Little Girls” is the first track on side one. The lyrics are taken from the point of view of a pedofile and address this particular sexual deviation. I like Richard Gibbs’ keyboards on this one, giving that nice early 80’s synthesizer sound. Steve Bartek and Kerry Hatch on guitar and bass respectively give the song an aggressive rocking edge that mirrors Elfman‘s vocal delivery.

“Perfect System” describes a world where everyone is in complete conformity. Life is programmed. There is no deviation. But in typical Danny Elfman fashion, the lyrics are very satirical, exaggerated to make a point. The music has a quirky sci-fi sound to it, evoking the future dystopian film Metropolis (1927).

“On the Outside” is a song about viewing the world as an outsider, one not part of the in-crowds or certain cliques. I could relate to this first aspect of the song, being a bit of an outsider in high school at the time this record came out. But the song’s outcast also seems to be a bit of a voyeur too, literally outside looking in. That part was definitely not me. Leon Schneiderman, Sam “Sluggo” Phipps and Dale Turner who provide the band’s signature horn sound are featured on this track.

“Capitalism” takes to task those who protest the free enterprise systems. I really like the pacing on this one, driven by the drum beats of Johnny “Vatos” Hernandez.

In 1964, the Kinks released “You Really Got Me” as their third single ever and the record reached number 1 on the UK charts within a month. The California band takes this Ray Davies song and works it into a paranoid frenzy. I think that delivery puts the song into a whole new light.

The second side opens with the title track “Only a Lad”, the tale of Johnny who is a delinquent, a thief, and a thug. But the song really takes a shot at those who would rather put the blame on the society around him that might have influenced him or failed him. This song was actually the first exposure my teenaged son got to the band, thanks to it appearing on one of the Guitar Hero video games. It does have a pretty decent guitar solo to it.

“What You See” is next. This one has some interesting vocals, from the bridge between the first verse and the chorus to the background echoing, that help make it stand out. I also like the chop-chop rhythm.

The paranoia returns in spades on “Controller”. It has a nice rapid-fire pace and a good use of repetitive lines.

“Imposter” is a direct commentary on music critics who try to come off as if they know more about making music then they really do. It might have been in direct response to someone from their early career as performance artists. Like so many Boingo songs, it is full of passionate energy.

The closing track, “Nasty Habits”, takes on the general topic of deviant behavior and what people do behind closed doors. It also addresses those people that are secretly interested in hearing all about said deviants, which is another kind of nasty habit entirely. The music has a bit of a classic calliope pace to it as well as some erratic piano and horns. It is really a rather complex piece of music that makes me really appreciate the band as musicians.

I got into listening to Oingo Boingo in 1982, around the time their second album had come out. I discovered them thanks to the local college radio station, where the band’s quirky style and non-standard lyrics were a perfect match. I picked up these early albums on vinyl and enjoyed listening to them when I was in one of those odd moods (which, for a teenager in high school with conflicting hormones happened quite a bit). I found the music to be a nice change of pace from the usual Top 40 or album rock fare that I heard on the commercial radio stations.

Only a Lad was just the start of my thirty year (and counting) relationship with the band. I count myself as one of their loyal legion of fans.
Posted by Martin Maenza at 5:22 AM