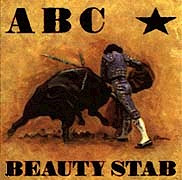 After their very successful debut record The Lexicon of Love (click here to see my review of that one), ABC decided to switch things up for their 1983 sophomore release. Where their first album had a more styled production, Beauty Stab leaned more towards a guitar-based sound. Did this change cost them? The album did not sell nearly as well and only reached number 12 on the UK album charts and number 69 in the US.


The first single “That Was Then But This Is Now” opens the first side. In went up to number 18 on the UK singles chart; in the US it reached number 89 on the Billboard Hot 100. The catchy up-tempo track talks of leaving the past behind and of taking a new lease on life. I like the instrumental bridge between the last verse and the final rounds of the chorus.

The stronger guitar emphasis is very evident on “Love’s a Dangerous Language”. For me, it almost has a bit of a Duran Duran feel to it. I like the jazzy bridge that starts with “the buckle is tied…”; it is like an oasis amidst the sea of rocking waves.

“If I Ever Thought You’d Be Lonely” has a slower saunter that is supported by a strong synth line. It gives a great feeling of dread and finality. The symbolism in the lyrics presents an interesting view of a divorce.

“The Power of Persuasion” uses what appear to be random phrases of gibberish to make a statement on advertising and its ability to convince people they need so many things to be happy.

The title track “Beauty Stab” is next. This two minute instrumental track has a good beat to it that puts the spotlight on the band’s musical chops.

“By Default by Design” slows things down a bit. The orchestration on this one is reminiscent of the first album and really showcases Martin Fry’s vocal skills at turning a phrase.

The second side starts with the rocking “Hey Citizen!” The bridge has a nice stripped down guitar riff.

“King Money” is a straight-forward statement about those who let the pursuit of wealth rule their lives. There is another amazing rapid-fire guitar hook at the 2:50 mark going into the bridge; it is very funky indeed.

“Bite The Hand”, another hard rocker, speaks of working together for a better future by taking things into our own hands.

The up-tempo “Unzip” is very sexually charged with the music perfectly matching the words.

The second and final single from the album was “S.O.S.” which went to number 39 on the UK charts but failed to pierce the US Billboard charts. This slow synth ballad allows Fry plenty of opportunity to croon, something he does so well. I love how the simplicity of the chorus works so well.

The album closes with “United Kingdom”, a strong political statement regarding the British government and the monarchy at the time.

Beauty Stab was released during the time when I was making a transition in my life, moving from being at the top of the heap in my high school graduating class in a small town to starting a new life as one of thousands of freshman at a large private university in a large city. I was already a content ABC fan with their first album so I really hadn’t made much effort to get the second one. I knew the singles from the radio and that sufficed me for a few years.

Still, I am a fan of this record today and my appreciation for it grows with each listen on my iPod. While far from being my favorite record from ABC, I can see what directions they were trying to take and applaud them for going the more challenging route (as opposed to just putting out a carbon-copy of the successful The Lexicon of Love).
Posted by Martin Maenza at 5:26 AM