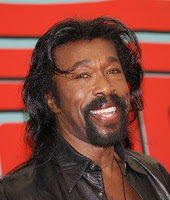 Before I knew who Nick Ashford (born 1941) was I knew his songs. Along with his life-time collaborator, partner and wife Valerie Simpson, Nick was responsible for writing many hit songs from the late 60's and the 70's. If you know "Ain't No Mountain High Enough", "Ain't Nothing Like the Real Thing", "You're All I Need to Get By", "Reach Out and Touch (Somebody's Hand)", and "I'm Every Woman" then you know just the tip of the work of this amazing musical duo.


Nick Ashford also was a performer, on many people's albums as well as on his own records with Valerie. Most people who know 80's music will remember their top 40 hit "Solid" which spent eleven weeks on the US Billboard charts and topped out at number 12. But they had an amazing career as a recording act too with a long list of songs that made the R&B charts from 1964 through 1997.

One special memory I have of Nick and Valerie is when they made a two day guest appearance on the CBS soap opera Guiding Light in 1984. One of the characters had opened a night club called "Floyd's Place" and various musical acts came on to the show, playing themselves, to perform at this fictional night spot. I remember those scenes well and how the couple came across as a loving team. Their long lasting marriage was something everyone should strive for - a true partnership in all aspects. And Nick's voice was so deep when he spoke - unforgettable.

On August 22, 2011, Nick died of complications from throat cancer.

Though he is gone, the legacy of music he left us will live on forever. Rest in peace, Nick Ashford.
Posted by Martin Maenza at 6:12 AM