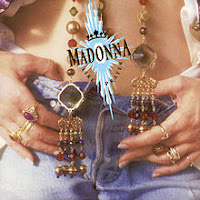 In 1989, Madonna released her fourth studio album Like a Prayer. As co-writer on all of the tracks, it had a much more intimate look into her personal world. The songs drew from her upbringing as well as events that were going on in her off-stage life. The result was an album that was both a critical and commercial success.


The album has sold over 15 million records worldwide, going multi-platinum in many markets. It also went to number on the charts of over seventeen countries including the US (where it held that spot for six weeks) and the UK (where it held that spot for two weeks). In the US, it actually debuted at number 11 on the Billboard 200 charts and within three weeks had reached number 1.

The cover brings to mind the Rolling Stone’s Sticky Fingers album cover, but Madonna puts her own personal stamp on it.

The title track "Like a Prayer" opens the first side. This first single from the album went all the way to the number 1 spot on the US singles charts, spending three weeks there before Bon Jovi’s “I’ll Be There For You” dethroned her. The lyrics tell of a young girl who is in love with God, making Him the most important male figure in her life. The music has a number of gospel elements, including a church organ and a backing choir, but also a dance beat too. The video for the song with its mix of sexual and religious imagery sparked a lot of controversy, causing Madonna's advertising deal with Pepsi to fall apart. Personally, I found the video to be very innovative and creative. Yes, it pushed the envelope but that is kind of something I would have expected from the Material Girl by this point in her career.

"Express Yourself" was both the second track and the second single. It debuted at number 41 on the US charts, reached the top ten within four weeks and eventually spent three weeks at number 2 (denied a number 1 by Simply Red's "If You Don't Know Me by Now" and then Martika's "Toy Soldiers"). The lyrics have a message of female empowerment as evidenced by the very first lines of the song. The accompanying video, with its homage to the classic Fritz Lange film Metropolis (from 1927), added to that theme. I think this song is an amazing dance groove and one that I have loved for over twenty years now. It has such high energy that anyone who loves to dance cannot ignore. It is definitely my favorite track on the record - a five-star song on my iPod.

"Love Song" was a collaborative effort with Prince. Not only did he co-write the track with Madonna but he also provided vocals as well. The song has a nice slow groove that they stripped down to the bare minimum, allowing the duo to play about with their voices. I like this rare time that two of my favorites came together musically.

"Till Death Do Us Part" is a response to Madonna's failed marriage to actor Sean Penn. At the time she was working on the album, the two were separated and heading for divorce. The song has a frantic pace that likely mirrored the chaos in their troubled home.

After all that, it is time to slow things down with "Promise to Try". This ballad has gentle piano and string accompaniment that allows Madonna to really expression the emotion of the lyrics. I think it is a very powerful song.

Side two begins on a more positive note with "Cherish", the third single that was released in August of 1989. It debuted in the US at number 37 on the charts and peaked at number 2. The song has an older feel to it, more like a pop-rock song of the 1960's or so. This is my second favorite song from the album. Whenever I hear it, my mood immediately picks up. I cannot help but smile when I sing along.

"Dear Jessie" was the fifth single; while it charted around the world in the US it failed to dent the Billboard 200. The song is named for co-writer Patrick Leonard's daughter. The song has a bit of a nursery-rhyme/psychedelic feel to it in both the musical arrangement and the lyrics.

"Oh Father" was the fourth single. While it debuted at number 55 on the Billboard Hot 100, it only peaked at number 20. This record broke her streak of sixteen consecutive top five singles and seventeen consecutive top ten singles. Similarly, the single sold modestly in other markets as well. The lyrics tell the story of an abused child who, as a grown woman, reflects on those years when her father mistreated her.

"Keep It Together" was the sixth and final single, released in late January of 1990. It took two months to achieve its highest position of number 8 on the US Billboard charts. The song has a funky R&B groove to it in the tradition of acts like Sly and the Family Stone. The lyrics reflect her feelings about family, how important hers is in her life. I like the beat on this one; it made the song a club classic back in the day.

Things slow down once more with "Spanish Eyes", another heart-felt ballad. If I close my eyes, I feel like I am transported to a small villa where the sun beats down on the dry, dusty soil.

The final track is "Act of Contrition", a very interesting piece. It consists mostly of a striking musical arrangement (a wailing guitar and backward masking of parts of “Like a Prayer”) and Madonna reciting/singing the prayer "Our Father". However, by the time she gets to the end, she is a little derailed. I think it might have been the backward masking that did it. It makes for an interesting religious bookend to the album's opening track.

I picked up Like a Prayer as a cassette when it came out in 1989. One thing I distinctly remember is the smell (yes, I said smell...I am not crazy here). The packaging of the first pressings of the vinyl, cassette and CD were all scented with patchouli oils to simulate church incense. Every time I opened the case to get out the tape I caught a whiff of the smell, and it stayed with me for a few minutes. Having grown up Catholic, I totally get the intent she was going for with this and applaud how it tied in perfectly with the religious overtones of this record.

This is one of my favorite records from the late 80’s. For me, it marks the end of an amazing first era of Madonna’s career. I would argue that the 80’s were the best decade for her musically. Like a Prayer really shows too how far she came from her self-titled debut.
Posted by Martin Maenza at 5:33 AM