The Smiths - Strangeways, Here We Come 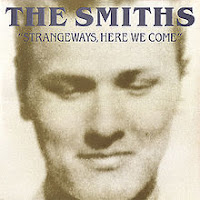 Jumping back to the “1001 Albums You Must Hear Before You Die” list, it recommends that I give a listen to the Smiths’ fourth and final studio album from 1987. Strangeways, Here We Come, which gets its name from a notorious prison in Manchester, went to number 2 on the UK album charts and number 55 on the US charts. It was certified Gold in both countries within a few years of its debut.

In past reviews of the band’s albums, I have admitted my struggles to understand just what the heck Morrissey’s lyrics are about. Sometimes I get them but a lot of times I am scratching my head. Since a good bit of these songs are unfamiliar to me, once again I’ll be giving a first impression and taking a shot at figuring them out. Let’s see how laughable that attempt is.


“A Rush and a Push and the Land Is Ours” starts side one. The percussion on this one is interesting, and the little growl that Morrissey puts in before the chorus adds a different touch. If I have to venture a guess, I am going with the lyrics referring to some action by a government to invade and take over another country (at the very least to take control over a situation through military force).

“I Started Something I Couldn’t Finish” was the second of the singles from this album, released after the band announced they were spitting up. It went to number 23 on the UK Singles charts. I really like Johnny Marr and Andy Rourke’s guitars on this one; the tempo is nicely up-beat. It sounds, to me, like this about an encounter between two people in a social setting that ends quite horribly.

Morrissey plays the piano on “Death of a Disco Dancer”, a slow and moody sort of a piece. I like the effects of the instruments that create the echoing sounds. The song refers to, I think, an unexpected death (perhaps a murder?) of a club-goer.

The first single, “Girlfriend in a Coma”, went to number 13 on the UK Singles charts. This song packs a lot in just two minutes. The song has a positive accompaniment to a rather heavy and sensitive subject. The singer sits bedside of his girlfriend who has slipped into a deep coma; he contemplates a final goodbye to her.

“Stop Me If You Think You’ve Heard This One Before” was released in other countries but not in the UK since a lyric mentions planning a mass murder and there had been a recent massacre in Hungerford, Berkshire, earlier that year. Usually when someone uses the phrase in the title, they are about to tell someone a joke. But the lyrics tell the tale of a troubled man, clearly no laughing matter. Perhaps it is more like a dark comedy, one full of irony, sarcasm, and comedic-tragedy.

Side two opens with “Last Night I Dreamt That Somebody Loved Me”, the final single from the album. It went to number 30 on the UK Singles chart. This song has a slower tempo while Morrissey expresses his loneliness of a life without love, one that not even a dream can cut through.

“Unhappy Birthday” is very much a song one would sing to their enemy. It is a very bouncy middle finger flipped proudly into the air.

“Paint a Vulgar Picture” is very much a statement directed at the record labels that put together compilations of songs for a band without too much of their input or approval. Clearly this was very much a personal response to a situation Morrissey and the band went through themselves (or it happened to someone close to them). It certainly seems that way.

“Death at One’s Elbow” opens with what sounds like a jackhammer and then kicks into a quick-step rocking rhythm. I like it a lot. Of course, the lyrics are dark and gruesome. That is just what I have come to expect from songs by the Smiths.

“I Won’t Share You” is the final track. The vocals are bit melancholy which fits well with the autoharp played by Marr.

I have to say that of all the Smiths albums I’ve listened to completely for reviews this year (three of the four), Strangeways, Here We Come is one I enjoyed perhaps the most. Morrissey’s lyrics and vocals, while still full of quite a bit of gloom and doom, appeal to me here a bit more than the earlier works. Perhaps it was an evolution of sorts. What a shame that this was the last release the quartet did together as it shows signs of growth in the group. Maybe, though, it was that “growth” that was part of what caused the group to splinter. I leave that for those with more familiarity with the band’s history to tell me.

(Send me those comments)
Posted by Martin Maenza at 5:19 AM

i totally missed out on the Smiths. I always felt it a shame, as I would probably really appreciate them now. I did hear a bit of M's solo stuff in the 90's, but he didnt catch my attention. Perhaps I will check out this album. thanks for another great review

I did not get into them myself until recently. It is never too late to explore something new.