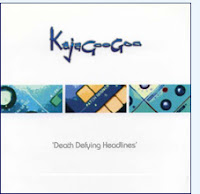 Earlier this year of 2011, a number of my good Twitter followers alerted me the efforts by the fan community of Kajafax (http://kajafax.co.uk/) to spread the word about the new release by the 80’s UK band Kajagoogoo. The five original members (Limahl, Nick Beggs, Steve Askew, Jez Strode and Stuart Croxford Neale), after a successful recent reunion tour, were getting back into the studio for a new single and EP.

The results of their efforts are now available everywhere for download as the four-track Death Defying Headlines. I got my copy the other week from emusic.com and have been enjoying the songs a lot.


The title track “Death Defying Headlines” starts things off. It has a nice funky bass line combined with a soaring synthesizers that I think works very well. The lyrics tell of ignoring what the media is saying and move on with getting lives back in order. There is a reference to the death of Princess Diana back in 1997 that stands out in my mind.

The next track shares the same name as the band‘s 2009 tour - “Space Cadet”. As expected, the song has a bit of a cosmic feel to it, but at the same time the groove keeps it nice and grounded. I could easily see this one becoming an instant dance club classic. It certainly has all the elements of the type of music I loved dancing to back in my club going days of the 80’s.

“Dreaming of the Same Thing” is next. Musically it reminds me a little bit of the 80’s sounds from another band, A Flock of Seagulls - another synth/guitar band that was a favorite of mine back in the day.

The dance party continues with the final track “High Life”. The lyrics on this one are a very mature reflection on one’s life, a viewpoint that clearly comes after the various ups and downs in the band’s careers in the past three decades.

I am always very pleased to see the return of 80’s artists with new music. This offering from Kajagoogoo was a nice sampler of, what I hope, will be a future full-length release. These four tracks are clearly just the tip of a whole new musical iceburg.

Something came to me as I listened to the tracks from Death Defying Headline and compared them to the slew of top 40 tracks this week in the US that my teenaged son and I heard on our car trip Saturday. I really appreciate that the guys from Kajagoogoo do three things.

The first is that the guys from Kajagoogoo actually play their own music. You can feel the passion and the experience in their sound. It is not some pre-canned drumbeat from a machine, which a lot of the songs I heard Saturday seemed to share (and the same drum beat no less on most of the songs).

The second is that the lyrics are about more than just going to the club or a party and hooking up. I swear that the songs today’s generation are listening to seem to be just about that and very little more. There is more to life to sing about. The guys from Kajagoogoo get this. Their songs make you think and feel. Much of the music from the 80’s did that. I think a good number of today’s “acts” seem to forget that.

Third and finally, I love hearing Limahl’s voice. The man never ever needed auto-tune and never will. So many of the songs I heard on that countdown Saturday sounded all the same. The male leads all sounded like clones of one another. There were no unique qualities to distinguish them.

So, in closing, if you’re looking for some new music and are a fan of classic dance tracks (from the 80’s and more), you cannot go wrong snagging the Death Defying Headlines EP from Kajagoogoo.
Posted by Martin Maenza at 5:21 AM

It was interesting to find out Kajagoogoo has a new release by way of your blog reviews. I was a fan in the 80's due to Duran Duran's Nick Rhodes being the producer of the first KJGG album. I also caught a fairly recent performance on a cable channel, I think it was an 80's fest in Britain. Pretty certain Tony Hadley was featured as well. Always great to see artists carrying on.

Stumbled across review when searching for feedback on this release. Nick was always a top-notch musician, it's a shame Kaja got pegged as brainless teenyboppers early in their career. I enjoyed the E.P. though I don't know if I'd remember any of it if you asked me to hum a few bars tomorrow. I do like their modified 80's sound with kind of a laid-back jazz feel. So, it's enjoyable but not memorable.

Sebastion, thanks for reading and the comments. I always like to see classic bands putting out new material. Certainly much better music than some of today's "artists" (I use that term loosely for what I hear on the radio today).