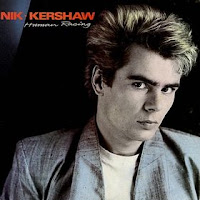 This album is reviewed by request for one of my Twitter friends. Thanks for suggesting it, Guy.

On February 24th of 1984, the then twenty-six year old Nik Kershaw released his first studio album Human Racing. With the help of strong pop production and his poster-pretty looks, the album achieved its highest position on the UK charts at number 5 (it spent a total of 61 weeks on the charts) and was also in the top 10 on the album charts in Finland, Germany and Norway. In the US after seventeen weeks total on the Billboard Hot 200 chart, the album only got to number 70.


“Dancing Girls” opens the album and the first side with an energetic synthesizer sound. As the third single, it reached number 13 in the UK.

The second single was “Wouldn’t It Be Good”; it went to number 4 in the UK (a spot it held for three weeks), number 9 in Canada and just fell short of the Top-40 in the US (it stopped at number 46) despite having a music video that played often on MTV. This is one of my favorite 80’s songs of all-time. I love the musical composition with the synth sounds and the steady beat. Kershaw’s vocals have a melancholy tone to them as he ponders what life would be like on the other side of the fence. This song really just seemed to connect to me at the time, when I was in my first few years of college. There isn’t any one person or event that I associate the song to; it just really fit my mood at the time and took a prominent position in my musical memories. Even today it gets to me as I’m singing right along with it.

“Drum Talk” has a great tribal beat and blasting horns. It is really hard to listen to it without tapping your feet; it gets right to your core being.

The tempo on “Bogart” is bit slower as the singer appeals to the famed star of the film Casablanca for relationship advice. Kershaw’s accent on this one is a bit more pronounced, at times almost having a bit of a German influence.

“Gone to Pieces” showcases Kershaw’s funk-guitarist background in another up-tempo dance track. I love the background singer-sounds on this one - they have an almost extraterrestrial tone to them.

The second side starts with “Shame on You”, another funky groove. In the song, the guy tells the woman he is enraptured with that he would do anything for her. Yet she still does not give him the time of day.

The new-wave dance track “Cloak and Dagger” has an espionage theme to the lyrics. The music has a bouncy beat to it.

“Faces” has a more somber tone. The lyrics could be seen as a commentary on the music business and how one must be cautious in dealings with management or record labels.

The tempo picks back up with the next track. “I Won’t Let the Sun Go Down on Me” was first released as a single in 1983 and got as high at number 47 on the UK charts; upon re-release in 1984 it went to number 2. I like the musical elements on this one, with its hint of reggae influences in the chorus.

The title track “Human Racing” closes the side and the album. This fourth and final single went to number 19 in the UK. The minimal music arrangement lets Kershaw showcase the softer side of his voice.

Human Racing is a nice yet often-forgotten piece of 80’s new-wave pop. It is definitely an album I would love to be able to digitally download. So far, I haven’t been very lucky locating it on places like iTunes, Amazon or emusic.com. Hopefully someday MCA Records will offer it for sale again for 80’s fans like me.
Posted by Martin Maenza at 5:27 AM

Great Album and one of my favourites from the early to mid 80s time period, sadly nowadays it's become quite difficult to find on cd and when it does it commands a high price because of it's scarcity, in my opinion it's nik's best work closely followed by The Riddle album, the songs are uniformly very strong from back to front and it's fair to say that the album is vastly underrated and deserving of much greater recognition, everytime i put this record on i'm transported back in time to 1984 being at secondary school and having no worries and just enjoying life and this great album. Guy aka @SirGuyOfNewWave

Thank you again, Guy, for suggesting it. I enjoyed it a lot.

Found your post while looking for a review of Nik's debut album.

"Wouldn't It Be Good" has been my anthem for the 80's all this while. The song has this tone of self-pity to it that i could readily identify even when i'm a grown up and (hopefully) wiser now.

But taken in a new context this song could easily be about the state of the world today, with all its uncertainties. There's such a wide interpretation to it that i doubt if Nik intended it to be this way when he first wrote it.

Besides the other singles, another song that offered a fresh perspective is "Cloak and Dagger". You mentioned that it has an "espionage theme" to it. But when i listened to it lately (after so many years), the words itself could mean nothing but words of warning about the powers that governments around the world holds over us. It's quite deep really.

Sad to say that i had lost this album a long time ago. i can't find it on CD too. The record company should reissue and remastered this album like so many old albums which they had done.

Anyway, must say your blog is quite interesting as it reviews some very obscure 80's albums that i have long forgotten. Keep up the good work.

Joshua, thank you so much for your comments. And I certainly can see what you are saying in interpretting these classic songs in a new, modern light. Good job. I look forward to your comments in the future.