the Rolling Stones - Tattoo You 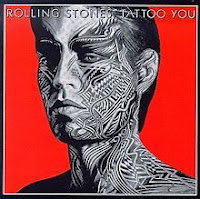 1981’s Tattoo You was the sixteenth studio album from the Rolling Stones. The record spent twenty weeks on the UK charts with a top position of number 2 and fifty-eight weeks on the US charts including time at the number 1 spot. It went Gold in the UK and four times Platinum in the US. It also went to number 1 in Australia, Canada, France, the Netherlands, and New Zealand. The album was ranked number 211 on Rolling Stone magazine’s 500 Greatest Albums of All-Time list.

Tattoo You built off the band’s successful momentum in the 80’s started by Emotional Rescue. Many of the songs culled for this record came from outtakes from earlier recording sessions.


Appropriately, side one kicks off with “Start Me Up”. This first single from the album spent nineteen weeks on the US Billboard Hot 100, three of which were at the number 2 position. It was denied the number 1 honor by Hall & Oates’ “Private Eyes” and then Olivia Newton-John’s “Physical”; it did however reach number 1 on the US Mainstream Rock chart. First cut in 1975, the band moved it from a reggae sound to a harder rock approach which I think really was a smart move. The song’s opening guitar riff by Keith Richards and the pounding drumbeats by Charlie Watts are a classic combination.

“Hang Fire”, the fourth and final single, spent six weeks on the US Billboard Hot 100 and reached number 20. The song’s lyrics laden with satire about England’s economic problems are a direct contrast to the up-tempo surf rock music style. Combined with the first track, I think these two make for a great one-two punch of rock and roll.

“Slave” was originally recorded in 1975 recording for the Black and Blue album. Billy Preston on organ and Pete Townshend (of the Who) on backing vocals on this this track support the band on this funky jam.

The second single, “Little T&A”, failed to make any lasting impressions on most charts beyond the Mainstream Rock chart, where it went to number 5. The song, about casual evening encounters, is a more stripped down rocker. Richards takes the lead vocals on this one.

Mick Jagger is back to the leads on “Black Limousine”, a medium tempo blue number that harkens back to some of the early 60’s roots of the band. The lyrics tell of the problems of aging romances and reflect a bit of what Mick was going through personally at the time.

“Neighbors” was one of the few newly penned tracks for the record, based on Richards’ experiences while living in a New York City apartment. The song is full of frustrated energy in response to people complaining about the noise that came from the musician’s dwelling.

The second side starts with “Worried About You”, a slow ballad that also had its roots in the recording sessions for Black and Blue. Jagger uses his falsetto voice for this one, harkening back to songs from the last album.

“Tops” continues the slow tempo with Nicky Hopkins on the piano. Jagger is in his smooth seductive mode here. Combined, it makes for a solid song.

“Heaven” also has a strong piano base, this time thanks to Chris Kimsey. Jagger’s falsetto is almost a haunting echo here.

The tempo of this side continues on the slow-mid range with “No Use in Crying”. I like the song with its blues sound, but I just sort of wished there had been a bit more variety on the back side of the record. Maybe that was the intent when it was put together though. I’m not sure.

The record closes with the second single “Waiting on a Friend”. The song, which has its roots in development as far back as 1972, spent twelve weeks on the US Billboard Hot 100 topping out at number 13. Hopkins plays the piano on this one as well and Sonny Rollins plays the saxophone; together they both beautifully carry the song along with Jagger‘s vocals.

Having an older brother who was a huge Rolling Stones fan, I heard a lot of this record during the later part of my high school and college years. I grew very fond of the songs, especially those that played on the radio airwaves. Tattoo You is like an old friend from high school that you enjoy reminiscing with every now and again.
Posted by Martin Maenza at 5:25 AM