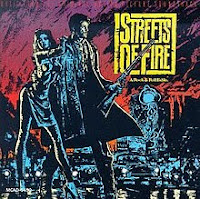 In June of 1984, a film hit the theatres that had dreams of being a big blockbuster but failed to gross enough to cover its original budget. Not even stars Michael Paré, Diane Lane, Willem Dafoe, Rick Moranis, Deborah Van Valkenburgh and a very young Bill Paxton could save Streets of Fire for cinema disaster.


Fire Inc. was rock band formed specifically for the film and included Jim Steinman, Max Weinberg (of the E. Street Band) and Rick Derringer (of the Edgar Winter Group). They open the album with “Nowhere Fast”, an up-tempo track penned by Steinman and sung by Laurie Sargent. The sound and the lyrics are typical Steinman through and through; in fact later in 1984 the track was one he provided to Meat Loaf for his Bad Attitude album.

Marilyn Martin had been a back-up singer for a number of artists like Stevie Nicks, Joe Walsh, Tom Petty and Kenny Loggins. In 1985, she’d have a smash hit duet with Phil Collins on “Separate Lives”. On this record she sings the song “Sorcerer”, accompanied first by simply a piano and then a more rocking band. Her vocals very much bring to mind Stevie Nicks on this song.

The English rock band the Fixx delivers the next track "Deeper and Deeper”. The song has a gritty, urban feel to it which mirrors in many ways the backdrop of the film itself. This single went to number 3 on the US Mainstream Rock charts and number 47 on the US Dance charts. I can remember hearing this one on the radio - both Top 40 and my college's radio station WITR.

Greg Phillinganes is a noted session keyboardist who had a couple albums in the 80’s. “Countdown to Love” mixes doo-wop with a modern dance groove for a unique sounding song. I like the combination.

The Blasters were a band out of California who had a number of albums in the 80’s as well. Their “throwback to the early days of rock and roll” style can be heard on two tracks from this record. The first is “One Bad Stud”, a boogie-woogie blues-rocker in the style that helped make the Stray Cats famous. This one definitely swings and has some wonderful horn solos.

The second side mirrors the first in that it starts with another Fire Inc. track “Tonight Is What It Means To Be Young”. In typical Steinman fashion, it too is full of big drama, full orchestration, and powerful vocals. For me, it is the weaker of the two Fire Inc. tracks on the record.

Maria McKee, a founding member of the cow-punk/country rock band Lone Justice, provides the next track “Never Be You”. This song is a bit more in the country rock style; Maria’s voice (which like Marilyn’s earlier) has hints of Stevie Nick’s to it and fits the genre well.

The stand-out song from the film is Dan Hartman’s “I Can Dream About You”. The 70’s disco keyboardist was going through a career lull until this track and its video hit the airwaves. The song spent sixteen weeks on the Billboard singles chart, peaking at number 6 and giving Hartman his biggest hit of his career. This is my favorite song from the album. I can recall that summer, when the song was popular, hearing it out at the dance clubs and bars. To this day, I like to sing along to it as the beat thumps on.

Ry Cooder, a blues-guitarist and composer, is next with “Hold That Snake”. Cooder doesn’t stray from what he is familiar; the song has a nice country-blues swing to it.

The Blasters return to close out this side as well with “Blue Shadows”. Like their earlier track, this one too has a classic Fifties rock feel to it with a strong piano base and backing horns.

Anyone listening to this soundtrack won’t get bored or feel that the songs are repetitious. The album is definitely a musical mix; it is fitting given that Streets of Fire carried the sub-tag line of “a Rock and Roll Fable”. I find the music to be a lot of fun.
Posted by Martin Maenza at 8:19 AM