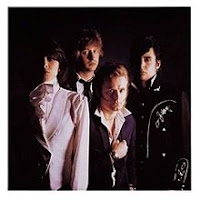 After the release of their self-titled debut, there was a lot of interest in a follow-up record from the Pretenders. Early in 1981, they released a five song EP that included two singles made popular in the UK. Those singles then became the foundation of their second full-length album aptly entitled Pretenders II released in August of 1981.

While the record was a top-10 seller in parts of the world (number 10 in the US, number 9 in Canada and number 7 in the UK), it didn’t sell nearly as well as their debut had. It took twenty years for the album to reach a Gold level of sales in the US.


“The Adultress” is the first track on the first side. It has steady driving guitars to accompany Chrissie Hynde’s sultry vocals on a tale of a woman who meets up for clandestine love-making outside her marriage.

As a single, “Message of Love” went to number 11 in the UK and 5 on the US Mainstream Rock tracks chart. It has a nice, catchy groove to it which I like a lot. The vocals are a little softer on the chorus of this one.

The next track is “I Go to Sleep”, a cover of a song by the Kinks written by Ray Davies. It went to number 7 on the UK charts. This one has a much slower tempo with the band supplemented by additional horns by guest musicians. This song is very much a look into what the future of the band would hold, a sound that would crossover into the pop charts as the 80’s continued.

“Birds of Paradise” continues along the same vein with another soft rock ballad. This one and the previous one really show off the vocal abilities of Hynde.

The next track picks up the tempo a bit to close out the side. “Talk of the Town” was also a single in the UK where it reached number 8.

The second side opens with “Pack It Up”. The song is not too bad but does not pack near the energy of the openers of the first side. It has attitude but not enough heart behind it to make it as convincing.

“Waste Not Want Not” has a little bit of a reggae flair to it with its rhythm and beats. Even the vocals have a nice swing to them. I think all those elements combine together for a decent song.

“Day After Day” did marginally well in the UK, reaching number 45 on the charts. It has a small piano solo about mid-way through.

“Jealous Dogs” continues the mid-tempo offerings. I do like how the word “jealous” bounces from one speaker to another around the chorus.

“The English Rose” follows suit with little change up from the previous track. For me, the two really start to blend into an indistinguishable blur.

“Louie Louie”, the final track and final single, only charted in the US and even then only went to number 110 on the Billboard Hot 200. It feels like a classic 60’s rock song with the powerful horn sections and steady beat. I think this is a nice way to close off the album; it has a lot of energy which I am sure translated well when played live.

I definitely can see why Pretenders II suffered a little from the sophomore album slump. It has some good tracks to it but at least a third of it feels like filler. I have to wonder if it might have done better had they skipped the EP release in between and also cut the number of tracks down to nine or so. I’m a firm supporter of quality over quantity when it comes to listening to an album; a few less tracks means more focus on making all of them really good. Unless you’re a major fan of the band, you can probably skip over a good bit of this record and just grab the hits off of one of the later compilation sets.
Posted by Martin Maenza at 5:23 AM