MYNX - Out of Sight Out of Mind 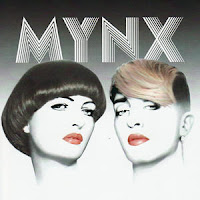 The musical duo known as MYNX are Ara Thorose and Holly Lovecat, two Los Angeles performers who’ve known each other since 2002 and became good friends after working similar venues. It was only natural for the two to collaborate. Each brings elements of their personal background to the mix, creating a sound that skillfully draws from electronic, pop, rock and dance.

I first became aware of MYNX last week while checking out the newly re-launched Catalyst magazine. The issue featured a profile on the band and also came with a download sampler that included one of their songs. After one spin, I was instantly hooked - so much so that I sought out the rest of the tracks of their 2009 EP Out of Sight Out of Mind to download.


The first track is “We Are MYNX”. I like the variety beats on this one; the first ones reminds me a bit of Queen’s “We Will Rock You” in their rhythm. The second layer of beats moves the sound into a whole new, very pleasing direction. Sadly, the track is under two minutes long. I really would have loved it to have gone on longer (perhaps in some kind of extended remix) as I think it would be great one for dancing.

“Kissie Show” kicks the tempo up with a rapid-fire groove that spins you around with great intensity. The lyrics are full of sexually-charged symbolism that comes across fresh and sassy. Hearing this one I’m reminded of the first time I heard Soft Cell back in 1982 - instant musical infatuation. I hit repeat a couple times in a row.

“Out of Sight, Out of Mind” has a bit of an ethereal touch to it. If the previous track was a night of wild club debauchery, this track is the morning after.

The opening of “Wolfgang Bang” fondly reminds me of my days with a turntable and vinyl. You just don’t get that sound with CDs. The dance beats return for a little voyeuristic adventure. This one brings to mind tracks by classic new-wave bands like Berlin or the Divinyls (in sound and theme).

The bonus track is “I’m So L.A.”, a little bit more of a rocker with clean drums and hard-driving guitars. The lyrics are fired off with a snaky, sarcastic flair which I find very entertaining. As residents of the City of Angels, who better than MYNX to poke fun at the clichés? It so works for me.

As a fan of many styles, particularly 80’s synth-dance sounds, I find that MYNX falls in perfectly to my music library. While they have elements that remind me of other groups, I find their sound to be a different and exciting mix. Their style and attitude is what I find lacking in a lot of modern music; it is something that this forty-six year old man can enjoy. I strongly recommend you give them a listen. I don’t think you’ll be disappointed.

For more on the band, you can check out the link to the Catalyst issue here - http://www.thecatalystmagazine.com/
Posted by Martin Maenza at 5:18 AM

Email ThisBlogThis!Share to TwitterShare to FacebookShare to Pinterest
Labels: 2000's, music, MYNX, Out of Sight Out of Mind

I am hearing about them for the first time, can't wait to get a taste of their music.