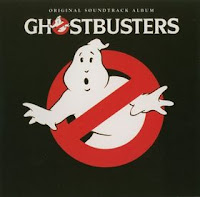 In June of 1984, a comedy film about a group of parapsychologists-turned-ghost-hunters hit the big screen. Written by and starring Dan Aykroyd and Harold Ramis and featuring Billy Murray, Sigourney Weaver, Ernie Hudson, Annie Potts and Rick Moranis, Ghostbusters became a huge box office success and a part of pop culture history. The film's special effects, quotable lines and iconic logo (seen above on the album cover) created the foundation of a franchise that would continue on for decades in the form of sequels, an animated TV series, toys, video games, comic books and more. I remember seeing it in the theatres on first run. I was back in my western New York hometown on summer break between my freshman and sophomore years of college, working by day in the freezers of the local ice cream manufacturing plant so that I could earn enough money to buy the Chevette off of my parents (my first car).


The Ghostbusters soundtrack debuted on the Billboard charts at number 30. Over its twenty five weeks on the chart, it fell back to 100 and then went back up to number 24 in January of 1985 before falling to its last position at number 87 in April.

Side one opens with the title song "Ghostbusters" by Ray Parker Jr. With its instantly recognizable musical hooks and quickly adopted catch phrases, it skyrocketed up the Billboard charts all the way to number 1 (where it spent three weeks after knocking out Prince‘s “When Doves Cry“). It also brought Parker some legal troubles as Huey Lewis took him to court for plagiarism (claiming the melody was copied from his 1983 hit "I Want a New Drug"); the case was settled out of court. I remember how huge this song was at the time. You could hear it all over the radio and at bars when we'd go out dancing. After I got back to college, it was also a favorite played at weekly floor parties - especially in October for Halloween.

The Bus Boys are "Cleanin' Up the Town" with the next track. I love the fast-paced piano punctuated by the horn sections and doo-wop backing vocals on this one. While not a hit single, the song was a fun one to dance to as well. It definitely gave you a good work out.

The Alessi Brothers were known for their light pop-rock sound. However, they pull out a bit of a funk for "Savin' the Day". The groove is light but serviceable.

The Thompson Twins lent "In the Name of Love" to the record. The song first appeared on the 1982 Set, their second studio album. US audiences were exposed to the song in 1982 as well on their US debut also entitled In the Name of Love. This one has the complex percussion that the band is known for, plus a funky guitar riff to boot.

"I Can Wait Forever" is exactly what you would expect from Air Supply, a melodic love song with amazing orchestration. And, they do indeed deliver. Some might say it sounds like every other Air Supply ballad; to me that is consistency.

The second side starts off with a "Hot Night" by Laura Branigan. This track would be her third soundtrack contribution in under a year and certainly not her last; she ended up contributing fifteen songs on twelve different soundtracks throughout the 1980's alone. The song is up-tempo with the typical pop-dance sound popular on many of her hit singles from the earlier part of the decade. I’m a fan of her music so, naturally, I like this one.

"Magic" by Mick Smiley is next. The percussion on the opening part reminds me a bit of Phil Collins’ “In the Air Tonight”. About midway through it changes the pacing a tad, taking on a little bit more of an edge. I think this was to emulate the tension in the film as the paranormal activity level increases in the city.

Elmer Bernstein was the composer of the film score. He serves up the instrumental "Main Title Theme (Ghostbusters)" and "Dana's Theme", both of which feature the use of ondes Martenot and a Yamaha DX-7 synthesizer. These two electronic keyboards provide a nice haunting sound, perfect for this film. The first track is an upbeat little number with some jazz and calliope touches. The later is more gentle yet sweeping.

The vinyl release then closes with an instrumental version of the opening track. I’m sure deejays back in the day appreciated having this as it would be perfect for mixing in and out as a teaser for the full song later in the set.

I have been a Ghostbusters fan since the first film came out. My friends and I often quoted dialogue from the movie as we worked that summer. A good friend of mine Kathy painted the recognizable black-white-red logo on a white T-shirt for me that I wore very proudly for the next few years (until it faded from too many washings). When I got my first computer, a Commodore 64, for my birthday in 1985, Activision's licensed game was one of those I played on it often. There is just something so appealing about guys running around with energy packs on their backs, zapping slimy spooks and specters.

(See how the classic geek revels in his geekiness?)
Posted by Martin Maenza at 7:01 AM