Aerosmith - Toys In the Attic 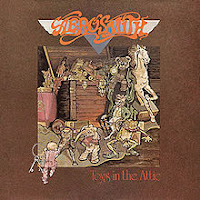 In 1975, the Boston bred band Aerosmith released their third studio album. Toys In the Attic was both a commercial and critical success. The record climbed to number 11 on the US Billboard 200 charts; it went Gold within four months of its release, and as of 2002 it had gone Platinum eight times over. Two of the four singles made it into the Top-40 charts. Rolling Stone magazine has ranked it number 228 on its list of the 500 Greatest Albums of All-Time.


The title track kicks off side one. "Toys in the Attic" was the B-side of the third single from the record. It proved more popular than the A-side "You See Me Crying", so the deejays flipped it which resulting in it charting at number 96. The song appears on the Rock and Roll Hall of Fame's "500 Songs that Shaped Rock and Roll" list. The song starts off with a peddle-to-the-metal rhythm and doesn’t let up for three minutes. I think it is a solid way to start a rock record.

"Uncle Salty" has a great guitar hook that swings. I find myself humming along to it.

"Adam's Apple" is a rocking tale of the Garden of Eden, told only as Steven Tyler can. The guitar work on this one is very cool - I like it a lot.

The second single, "Walk This Way", was a smash hit and went all the way to number 10 on the Billboard charts. Joey Kramer on the drums opens the record, followed by Joe Perry and Brad Whitford on guitars and Tom Hamilton on bass. This is one of those songs that I know by heart; I sing along with Tyler on the rapid-fire delivery of this tale of a high school boy losing his virginity at a school dance.

It was also thanks to "Walk This Way" that Aerosmith was able to revitalize their career in the 1980's, thanks to the joint effort on Run-D.M.C.'s 1986 Raising Hell album (see Martin's View: Run-D.M.C.- Raising Hell for more details).

As a pre-pubescent boy I always laughed at the title of "Big Ten Inch Record", a double-entendre to be sure. The music has a classic big band feel to thanks to the added horns and piano.

Side two opens with "Sweet Emotion"; as the first single from the record and the first by the band to break the Top-40 (it went to number 36). At the time, the band was experiencing some problems with Joe Perry's wife and that tension provided the inspiration for this song's lyrics. The opening is a classic with Hamilton on the bass. The added effects were achieved with the use of a talk box, a device that altered the sound of Perry's guitar to make it mimic human speech. The repeated guitar riff between verses is so powerful it is engrained into my psyche. This song takes me right back to my youth. It ties with “Walk This Way” for favorite track from this album.

"No More No More" is a song about life on the road and the temptations of groupies. I like how the chorus is a simple repetition of the song title. It works very well in this case.

Next is "Round and Round" with its very heavy, lumbering rhythm. The feeling it invokes in me is that of being very buzzed at a party; everything is just slightly out of focus and disjointed. I’m not a huge fan of this one but I certainly get where they are going here.

The final single from the album was "You See Me Crying", released in November of 1975. This piano ballad with accompanying orchestration failed to chart though. The sound is very different from any of the previous eight tracks but that doesn’t mean its not a good song. It is nice to get that sensitive side in Steven’s vocals here. Again, this is another track I’ve not listened to enough over the years but it is starting to grow on me each time I go through the album.

I was ten years old at the time this album came out. My older brother was fourteen and, being much more into rock, had a copy of this one on vinyl during his high school years. The tracks were also a main-staple of the album-oriented rock station that we picked up from Buffalo. As such, I heard the songs quite a lot and came to appreciate the Aerosmith sound. As I got into high school, these tracks were go-to music for a great party.

Anyone who only knows the later Aerosmith records must check this one out. There is a reason it is a classic as there isn’t a bad song in the bunch.
Posted by Martin Maenza at 8:21 AM