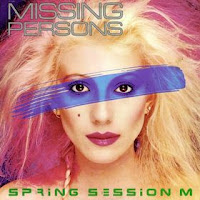 The Los Angeles based new-wave/rock band Missing Persons was founded in 1980. They put together a four-song, self-titled EP to help promote their band while on tour. Before they signed a deal with Capital Records, the EP was re-released in 1982 with a change in songs.

Their first major label release was the October 1982 Spring Session M. For those wordsmiths among you, you will notice that the title of the record is in fact an anagram for the band‘s name.


This debut album was the highest charting record of the band’s short time together in the 80's. It was certified Gold and peaked at number 17 on the US Billboard album charts. The four singles that came from it received heavy airplay on album-oriented rock stations; the four accompanying music videos played in heavy rotation on the newly launched MTV.

“Noticeable One” starts off side one with hard rocking guitars by Terry Bozzio, Warren Cuccurullo and Patrick O’Hearn. The lyrics are a plea for attention. As if anyone could possibly miss lead singer Dale Bozzio on the cover with her striking features and sparkly eye-shadow. I can’t help but pick out that one of the lines name-drops the Weekly Reader (the name of an educational news paper with current events that was targeted for school kids).

“Windows” was the third single from the album, peaking at number 63 on the US Billboard Hot 100 charts. The song showcases the band’s use of synthesizers which Terry, Patrick, and Chuck Wild all played. The song is about having the safety of a window to stay behind while watching the world go by. I definitely preferred the tracks like this one that emphasized the new-wave aspects of the band.

Another favorite of mine is “It Ain’t None of Your Business”. The song is full of attitude as the singer tells a former lover that he no longer has the right to keep tabs on her.

“Destination Unknown” is one of the tracks from the original EP to appear on this album. It spent thirteen weeks on the charts and reached number 42. This one is my absolute favorite track from the album. Something about the ambiguity theme in the lyrics spoke to my teenaged self. It seemed like a great song for someone who wasn’t completely sure where the future was going to take him. There are times even as an adult that it fits.

“Walking in L.A.”, the fourth single, peaked at number 70 on the Hot 100. This song is very much an observational anthem about the band’s home town. It acts as both a commentary on the LA residents (on the dependence on their vehicles to get anywhere and on social-status symbols that their cars were).

“U.S. Drag” moves the sound back into the rock-genre. Terry Bozzio provides some wonderful drum-syncopation on this one.

Side two opens with “Tears” and more amazing drum work. I really like this deep-track a lot; the chorus is very catchy and Dale skillfully delivers the rapid-fire lyrics in her unique style.

“Here and Now” is a good track. What I always liked about this record was that even the filler tracks were enjoyable to listen to.

“Words” is the other track from the original EP to appear on the album. It too reached number 42 on the Hot 100 charts. This song has a nice driving beat that made it a dance favorite. I often find myself singing along to the lyrics that convey frustration when communication breaks down between two people.

The rocking “Bad Streets” is next. “Rock & Roll Suspension” continues that same sound. The album closes with “No Way Out”, another steady rocker. I’ll admit that these three were not heavy on my rotation twenty nine years ago. They suffered from the “end of the second side” curse. They’re not bad songs; they’re just not favorites.

I was finishing up my junior year of high school when this record came out. The neon pink halo-effect of Dale on the cover with the blue-stroke across her face was irresistible; it called to me like a siren from the new release rack. And though I was familiar with the singles that had been showing up on the radio, I quickly became a fan of the band. Their sound fit well with the new-wave acts that were coming out of the US at the time. And Dale just had one of those very distinct voices that made the group stand out even more.

I was very lucky a few months back when I went to visit my parents. I was flipping through my brother’s vinyl and found that this was one of my records he managed to keep. I quickly popped in a blank CD and burned a copy. I was ecstatic to find that the album was still pristine (no scratches or skips); the transfer to digital has just that slight hint of warmth that listening to vinyl often conveys.

I am very glad that the Missing Persons are no longer missing from my music library.
Posted by Martin Maenza at 5:31 AM

you're right, I did enjoy this blog, particularly because now I have to go back and pick out all of the nuances in the Best of album that I purchased and not just focus on Dale's voice. thanks again for the heads up :)

Rosemarie, any time. Thanks for reading.