Jimmy Buffett - A White Sport Coat and a Pink Crustacean 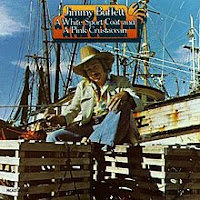 The summer of 1973 saw the release of popular American singer-songwriter Jimmy Buffett’s third studio album, the very interestingly named A White Sport Coat and a Pink Crustacean. The title is, in fact, a play on the 1957 Martin Robbins’ country song “A White Sport Coat and a Pink Carnation”. This album was also the first where Jimmy’s backing musicians were referred to collectively as “the Coral Reefer Band”.


Although it did not make it into the Billboard 200 album charts, it did reach number 43 on the Billboard Top Country Albums chart. A number of the singles also charted. While not a commercial success at the time, the album is considered by many as one of Jimmy’s better albums and one of the foundations of his long-time success.

Side one opens with “The Great Filling Station Holdup”, the first single from the record. This up-tempo song went to number 58 on the US Country charts. It tells the story of two robbers that hold up a gas station and are subsequently caught after drinking with the money they stole.

“Railroad Lady” is very much a traditional country song about traveling by train. The steel guitar and harmonica set the tone nicely. If you close your eyes, you feel the wheels clacking across the rails. It is a very soothing song.

“He Went to Paris” was the fourth and final single from the record. This ballad is very introspective as it presents a story of a man looking back on his life. The steel guitar is very haunting.

“Grapefruit-Juicy Fruit”, the third single from the record, went to number 23 on the Billboard Easy Listening charts. The music has a tropical sound to it that brings to mind images of a sunny beach. It puts me in a nice, relaxed mood.

“Cuban Crime of Passion” continues the island sound to close out the side. What I really love about these classic country songs is how they can tell a story in three minutes time. That is something that really makes the 70‘s decade for me, musically.

The second side opens with the infamous “Why Don’t We Get Drunk (and Screw)”, the B-side of the first single. It was a jukebox favorite for many years afterwards as most country radio stations could not play the song due to its sexual reference. Originally the song was meant to be a satire of standard country songs, but its popularity ended up making it one of Jimmy's most performed songs in concert. Everyone I know who is a Buffett “parrot-head” loves to sing along to the refrain, as loudly as they can. Usually it happens when they‘ve been drinking a bit, naturally.

“Peanut Butter Conspiracy” has a nice moving tempo to it that gets my toes a tappin’. Like the first track from the record, this one too advocates a little bit of five-finger-discounting at the local mini-mart. At least Jimmy and the boys imply they’d make good on their thieving if they ever made it big.

The second single from the album was “They Don’t Dance Like Carmen No More”. This is a slower track that I find myself swaying back and forth to.

“I Have Found Me A Home” was released on the B-side of the third single. This is another slower tempo number.

“My Lovely Lady” is another nice mid-tempo song. Its lyrics sing the virtues the woman in his life and spending a quiet life with her down in the Florida Keys.

The album ends on a slower note with the ballad “Death of an Unpopular Poet”. Now, for me, I prefer the more up-tempo Buffett songs. So the last four tracks on the album are a little bit too mellow for me a lot of the time. However, they are decent songs and enjoyable if a mellow mood is what you’re going for.

I must admit I didn’t start out as a Jimmy Buffett fan. While I knew his crossover hits from the 70’s, I really wasn’t that into him. However, my wife was a fan and picked up one of his four-disk compilation box sets on CD in the early 90’s. Still, I wasn’t convinced. I always said to her that I had to drink an awful lot if I was going to sit down and listen to more than a few Jimmy Buffett songs in a row.

All of that changed though when I got my iPod a few years back and was ripping our CD library into digital format. I ran across the box set and decided to pull it all on to my computer. But, unlike my wife who kept it all under the box set, I decided I had to break the tracks out by albums.

Yes, I am very anal-retentive like that - I had to put them into the years of original release, under the original album and in original track order. Order is very important to me.

What I found, though, was that I actually enjoyed his music when presented in their historical perspective. I became a fan. Yes, very late in life, but I became a fan. And I didn’t even need a drink to do it.
Posted by Martin Maenza at 7:51 AM