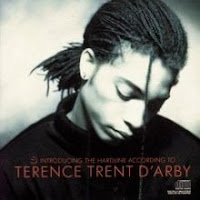 When the twenty five year old, Manhattan born Terence Trent D’Arby came onto the music scene with his debut album in 1987, many compared him in ways to Prince. Both men are attractive with a strong sex appeal, both are singer-songwriters, both play many instruments well, and both had very active hands in the productions of their debut albums.

Introducing the Hardline According to Terence Trent D’Arby was a very popular album right out of the gate. It sold a million copies within the first few weeks of going on sale; over the decades it has sold nearly 14 million copies. It was an instant number 1 smash in the UK, spending nine weeks total at that spot. In the US, its rise was slower but it eventually peaked at number 4 on the Billboard charts in 1988.


“If You All Get to Heaven” starts off side one with a muffled, scratchy beat that brings to mind an older recording on vinyl. The song combines elements of D’Arby’s gospel background with his love of classic R&B in a very powerful and interesting way.

“If You Let Me Stay” was the first single released from the record. While it went to number 4 in the UK, it only did marginally well on the US Billboard charts (stopping at number 68). It has a more pop sensibility to it with a snappy rhythm. It reminds me of some of the soulful offerings that Michael Bolton would put out in the early 90’s.

“I’ll Never Turn My Back on You (Father’s Words)” gives yet another style, this one a funky mix that has some Ska-like aspects too. I like the guitar syncopation and the horns on this.

As a single, “Dance Little Sister” went to number 30 on the Billboard charts and number 20 in the UK. It did a bit better on the US R&B and Dance Club Play charts, going to number 9 and 7 respectively. This one is very much a full-blown dance groove in the vein of James Brown or Michael Jackson, one that I think works very well. The original album track is nearly four minutes long, but the eight-minute dance mix really works it nicely.

The tempo slows down a bit with “Seven More Days”. The singer speaks of debts having been repaid and that within a week he’ll be back home to his love. D’Arby works out the vocal gymnastics smoothly on this track.

The second side begins with “Let’s Go Forward”. It is the first track on the record that I don’t find to be as original; it sounds a lot like any other popular R&B ballad groove at the time.

“Rain” has a nice ratta-tat-tat rhythm and a more synthesizer sound to it. It incorporates the child song of “rain rain, go away” into the chorus with some good results. I like how it progresses and how the lyrics have a countdown of sorts to it too. I bet it would make for a good live performance with some great improvisation.

“Sign Your Name” was a top 10 hit single (number 4 in the US, number 2 in the UK). The tempo is slower but the combination of the music and the vocal delivery really makes this one work. I can’t help but develop a slow-sway when listening to it. It is just so smooth, sultry and sexy. The song is one of D’Arby’s most popular, and it has been covered by such artists as Michael Bolton, George Michael and Sheryl Crow.

“As Yet Untitled” is an acapella song that showcases the powerful voice that D’Arby has. It is very haunting and moving.

The album closes with a cover of the Smokey Robinson classic “Who’s Lovin’ You”. This song has a rich history of covers since the Miracles recorded it first in 1960; Brenda & the Tabulations, the Supremes, the Temptations, the Jackson 5, Lauryn Hill, and En Vogue have all done their versions of the song. D’Arby does the song a good turn, infusing a nice bit of doo-wop and soul into his version.

Thanks to the album, D’Arby was nominated for the Best New Artist in both 1988’s Grammy Awards and Soul Train Awards. While he did not win those, he did win the 1988 BRIT Award for International Breakthrough Act. The album also won the 1988 Grammy Award for Best Male R&B Vocal Performance.

The time that this record came out was a busy one for me personally. I was just finishing up my senior year of college and circulating resumes to find a job. As such, I hadn’t been exposed to the whole album - I was just aware of the hit singles that played on the radio and in the clubs. Once I moved South for my first job, I became a bit more aware of the album‘s other tracks. One of my new friends in the apartment complex I was living had the record and would play it a lot.

I currently have the hit singles in my music library, but there are a number of these tracks I’m certainly going to add in the future.
Posted by Martin Maenza at 5:27 AM

Email ThisBlogThis!Share to TwitterShare to FacebookShare to Pinterest
Labels: 80's, Introducing the Hardline According to..., music, Terence Trent D'Arby