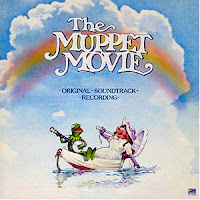 With the new Muppet movie coming out later this summer, I thought I’d revisit an old favorite of mine from back in 1979, the soundtrack of the first Muppet Movie.


Now, I will have to go on record right from the start and state that I have been a big fan of the Muppets since my pre-school days watching Sesame Street. My generation (kids born in the mid to late 1960’s) was the original kids that grew up on that show. Of course, when Jim Henson brought Kermit the Frog over to host the Muppet Show in 1976, I was following right along. There we met a zany cast of new characters and found a sarcastic, comedic side of these creations. Week after week, I watched the show faithfully at 7:30pm and loved it! Jump ahead a couple years to the middle of the show’s run and it was only natural for the cast to hit the big screen in the summer of 1979 with plenty of madcap antics and fun musical numbers.

All of the songs on this soundtrack were written by Academy-award winning singer/composer Paul Williams and jazz pianist Kenny Ascher. The record sold very well, reaching Platinum status. It was nominated for the Academy Award for Best Original Score and Best Song (“Rainbow Connection”). It did win a Grammy Award for Best Children’s Album (Soundtrack) and a Golden Globe for Best Song (“Rainbow Connection”).

Kermit (voiced by Jim Henson) leads off the first side with the opening number from the film “Rainbow Connection”. The single spent seven weeks on the US Billboard charts and made it up to number 25. Of course, it has that ever so familiar banjo opening. The lyrics are about dreams, like rainbows, that we occasionally find ourselves staring off into the distance and pondering. I think if you started to sing this one to anyone of my generation they would immediately know the words and start to sing right along with you. The song has been covered by an array of artists over the years including the Carpenters, Judy Collins, Sarah McLachlan, the Dixie Chicks, Justin Timberlake, Willie Nelson, Jason Mraz, and the Pussycat Dolls.

Kermit is then joined by his best pal Fozzie Bear (voiced by Frank Oz) for the rousing “Movin’ Right Along”. This one is a bouncing, buddies “on the road” number in the tradition of Bing Crosby and Bob Hope. Their travel dialogue is very entertaining.

Miss Piggy (also voiced by Frank Oz) gets to shine like the swine-starlet she is with “Never Before, Never Again”. The film’s love song is delivered in her signature breathy style. Of course, this is Miss Piggy so she then breaks out the Ethel Merman glory notes at the end.

An instrumental version of the song follows.

Kermit and Rowlf the Dog (also voiced by Jim Henson) then team-up for “I Hope That Somethin’ Better Comes Along”. Their banter over the tickling of the ivories is in typical Muppet style. It has a nice rag-time rhythm to it with plenty of playing on words.

Side two explodes with “Can You Picture That”, a rocking number by Dr. Teeth and the Electric Mayhem (Jim Henson, Richard Hunt, Jerry Nelson, Dave Goelz, and Frank Oz). This song is in the vein of many early 70’s rock numbers from folks like Dr. Hook. The Electric Mayhem was always an enjoyable part of the TV show for me; clearly each of the band members was based on the Muppet troupe’s favorite rock stars.

An instrumental version of “I Hope That Somethin’ Better Comes Along” is next.

Gonzo (voiced by Dave Goelz) sings “I’m Going to Go Back There Someday”, a song with a down home folk sound to it. The guitar and the harmonica make me think of sitting on a back porch on a starry night. Gonzo’s voice, of course, portrays the longing of the lyrics quite well.

Fozzie gets all patriotic with the classic “America”. Very simple and straightforward. As he says “patriotism swells in the heart of the American bear”. One of my good friends in junior high used to do an amazing Fozzie impression.

The instrumental “Animal…Come Back Animal” is next. It has a sweeping and majestic opening, followed by a movement that would be at home in any western. The last thirty seconds swing nicely with a little bit of jazz. It is really a mish-mash of styles that work well together.

The album closes with the whole crew for “Finale: The Magic Store”, a big production number about focusing on your goals and attaining them. The music has a very 70’s feel that dates it, but at the time of the release it was “happening” and “now”. This track also contains a reprise of the “Rainbow Connection” with the whole cast. The overall message is a positive one.

I bought this album on vinyl back when it was released in 1979. Like all of my old vinyl, this one too is long since gone. I definitely want to thank whoever posted these tracks up on Grooveshark - which allowed me to dip back into this vault and dust off some old memories. What is really amazing, listening to it again now after thirty-two years, is how I remember the lyrics to nearly all of these songs. They’re like an old friend who I haven’t heard from since junior high school suddenly reconnecting with me on Skype; the record and I fell right back in line as if not a day had passed since we used to hang out in my bedroom.

That is the power of music, when it can evoke great memories of days gone by.
Posted by Martin Maenza at 8:32 AM

This brings back some great 8th grade memories. Thanks.