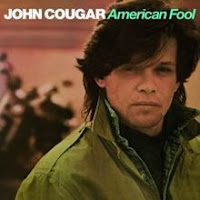 On June 10th of 1982, John Mellencamp released his sixth and last album under his stage name of John Cougar.

It also turned out to be his big commercial breakthrough, scoring a number 1 spot on the US Billboard 200 album charts and the Canadian album charts. It sold over 10 million copies in North America alone.


The first side opens with the first single from the record, “Hurts So Good”. The song was co-written by Mellencamp and his childhood friend George Green. It spent twenty-two weeks on the US Billboard charts, four of which were at the number 2 spot (it was denied the top spot by the six week run of Survivor’s “Eye of the Tiger”). It starts off with the steady drumbeats of Kenny Aronoff and then the guitars of Larry Crane, Mike Wanchic and Chocolate Perry. It is that rock and roll sound the makes the song memorable to me.

The previous track was still at number 3 when “Jack & Diane” entered the Hot 100 at number 69 in July. By September, this track was at number 4 while “Hurts So Good” slipped down to number 8, giving John Cougar two hit songs in the Top 10 at the same time. Finally, this track reached number 1 where it remained for four weeks. This little ditty tells the tale of the youthful romance between a couple of teenagers in the mid-west, but it resonated with the youth everywhere at the time. I know it did for me. The summer this one hit the charts I was involved with my first girl-friend Rhoada Bailey, and this happened to be “our song”. That relationship barely lasted into the fall (we went to two different high schools over fifteen miles apart) but the song will always remind me of those times.

“Hand to Hold on To” was the third and final single from this release to chart. It spent eleven weeks on the charts and topped out at number 19. The song, with a slightly slower tempo than the first two tracks, tells of how everybody can always use a little support and help from someone. I think it has a nice message to it, delivered in a very easy-going way.

“Danger List” is another mid-tempo track co-written by Mellencamp and Larry Crane. In some ways, it has a Springsteen sort of feel to it.

“Can You Take It” closes out the side. It has a good rhythm to it. Again, the guitars and drums provide that solid rock-country sound that reminds me of hanging in a small town local bar, drinking beers and shooting pool.

Side two rumbles in with “Thundering Hearts”. This song is a good one to drive to; it has that sound and feel of traveling the open roads with the wind whipping past.

Next is “China Girl”, a song about a relationship with an Asian young woman. It is a certainly different take than David Bowie’s hit song of the same name from the exact same year. This song, written by Joe New and Jeff Silbar, is much more sensitive and softer.

“Close Enough” opens with some rocking hand claps and the sound of pounding metal. It is a song about a guy from not necessarily the right part of town who might not necessarily have the type of reputation one might expect. I like the high energy in this one.

“Weakest Moments”, the last track on the original vinyl release, slows things down one more time with a nice ballad. Mellencamp’s vocals are so raw and blend so well with the guitar, making the song feel very personal. It is nice.

The 2005 CD re-issue added one more bonus track, the title song “American Fool”. It has a sound more reminiscent of the earlier tracks on side one, more up-tempo. I’m sure it was left off the original release for a good reason - either it didn’t quite fit with the rest of the record or the overall running time was too much adding this one to the others. I like it though.

I was familiar with a good bit of the American Fool album, thanks to radio airplay and having purchased a few of the singles as 45’s. The songs very much remind me the early 80’s but the record does not sound dated in the slightest. Mellencamp and his band have a sound that could pretty much come from any young band today from the same music genre. That’s the sign of good music.
Posted by Martin Maenza at 5:19 AM