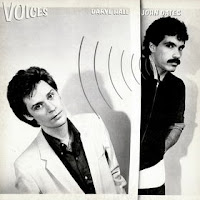 By the time the 1980’s started, Daryl Hall and John Oates already had eight studio albums under their belt, along with seven Top-40 hits. But with the new decade, they decided it was time for them to produce their own albums, feeling they knew best how to present their songs. The first album under this new direction was the 1980 Voices. This change turned out to be a smart one, as their popularity and sales would skyrocket into the stratosphere with this record and beyond.

The original LP for Voices, which went to number 17 on the US Billboard Album chart and number 19 in Australia became a Platinum seller, has a variety of covers. All were in black and white, but the poses of the duo varied. The one I’ve included with this blog post is my favorite.


Side one begins with “How Does It Feel to Be Back”, which was also the first single from the album. It only did marginally well, peaking at number 30 after four weeks on the US Billboard Hot 100. The song, about revisiting a former relationship, has a nice rocking sound to it. It was a good way to start the record, as the title question could also be sent out to the old fans. Clearly their answer would have been “great”.

Next is “Big Kids” with a more pop sound that fans are familiar. The song implies that many adults are nothing more than just big kids, still looking for fun. It gets a little repetitive with the chorus repeated four times.

“United State” has a bit of a new-wave feel to it as it uses political buzz-words to ponder continuing a relationship. The guys were clearly experimenting with popular styles, and this one is a pretty good attempt at one of them.

“Hard to Be in Love with You” examines a long distance relationship. I like the sound effects used before the second verse to simulate a phone dialing.

The third single from the album was “Kiss on My List”, the break-thru song from the album. Of its seventeen weeks on the Billboard Hot 100, it spent three of them at the number 1 spot after ousting Blondie’s “Rapture”. According to Hall, it is actually an anti-love song, implying that the kiss is only one thing on the list of best things and not the best thing. Even so, this is my second favorite track from the record.

“Gotta Lotta Nerve (Perfect Perfect)” combines classic doo-wop with a new-wave groove. I just love the hard edge of the keyboards and the guitars here. The lyrics are delivered in a little condescending way. It would be right at home in a mix with songs by Devo or Sparks.

For the second side opener, the duo went with the classic “You’ve Lost That Lovin’ Feelin’”, a number 1 hit for the Righteous Brothers in February of 1965 (which was the number 1 song the week before I was born). This was the second single from the album; it went to number 12 in the US and number 55 in the UK. Hall & Oates clearly have a love of the soul classics and give this one a very respectful rendition.

The fourth and final single was “You Make My Dreams” which was a number 5 hit during the summer of 1981. Of the eleven tracks on this album, this one is my favorite. From the opening guitar chords to that bouncing beat, it just puts me in a great mood any time I hear it. If I’m in the car by myself, I’ll turn it up and sing along with them. Right now, I am bopping at my desk while my fingers dance all over the keyboard.

This original version of “Every Time You Go Away” has a bit of a blues/gospel feel to it. Hall’s vocals carry the emotional heartbreak whenever the couple is apart. In 1985, Paul Young released his own version of the song which went all the way to number 1. I love Young’s interpretation a lot as it is a different twist from the original.

“Africa” has a fantastic tribal beat and chant to it that gets my feet tapping. The song tells of how the singer’s model girl friend left him to go to another continent for a photo shoot. I have to smile at the line “…I’ll get to her before the lions and tigers try to jump on her bones…”.

The record closes with “”Diddy Doo Wop (I Hear the Voices)”, another blend of the early 50’s doo-wop with a more modern sensibility. Once more, Hall and Oates pay tribute to the classics of the past (with a little tongue-in-cheek nod to their own “Rich Girl” from the 70’s).

Voices is one of those albums that slipped by my radar back in the day, but I’m happy to have discovered in more recent years as I was back filling some of my music library. I was a fan of Hall & Oates and was pleased to hear some of these tracks for the very first time. You can definitely see how this record was a transition from their earlier offerings in the 70’s to their chart-busting success as the 80’s continued to unfold.
Posted by Martin Maenza at 5:26 AM

they're so awesome, such a timeless classic. great post!

Great review! Hall and Oates always seemed to know how to put the right lyrics and sounds together to make great pop tracks.

Ally, definitely will have more Hall & Oates in the future. They had a string of amazing albums in the 80's.

Paul, thanks to your blog post on the band to remind me I needed to give these guys some representation.