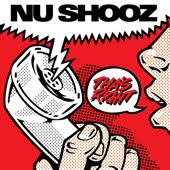 Nu Shooz is the husband-wife musical team of John Smith and Valerie Day, who hail from Portland, Oregon. Their first recording, an eight song release, was done in 1982 on a small label called Nebula Circle. In 1986, they had their first major label recording Poolside on Atlantic Records (of which I am a huge fan - but that album is a blog post for another time). In between those two was a five song EP entitled Tha’s Right that was put out on Poolside Records.

I first heard of Nu Shooz in early 1986 (when I was back at college for my junior year) as dance clubs had picked up one their tracks. That was the Dutch remix version of “I Can’t Wait” which had gotten them major label attention in the United States. Recently discovering Tha’s Right, which includes the original US version of the song, was like unearthing a lost treasure after many decades at sea.

Let’s take a look at this release.


First up is “Underground” which starts with a steady beat from Valerie on percussion. I like how the guitar chords by John lightly dance over them. And, together, their vocals blend in perfect harmony.

Next is the aforementioned original American mix of “I Can’t Wait”. For those familiar with the 1986 version, this one will sound a little different. There is no mixed in snippets of Madonna's
"come one" from "Get Into The Groove", for example. I do like this stripped down take on the song though. John’s guitars are very funky in a similar vein to disco classics like those of Chic. The horns and the percussion are also crisper, cleaner; you can make out the original musical approach from this recording. If you are a big fan of the song, I definitely think you’ll like the original take on it.

“Goin’ Too Far” continues the funk-dance groove. The composition sounds similar to other R&B dance songs that I was a fan of at the time (like tracks from Midnight Star). Of course, Valerie’s sweet vocals give it that unique Nu Shooz sound. And, as readers know, I’m a big fan of saxophone so I like the horns (Danny Schauffler and Lewis Livermore) on this one as well. This is definitely one I would have loved to have put into my dance-mix tapes back in the day.

“Make Your Mind Up” actually was released as the B-side to the single “I Can’t Wait” in 1986. It opens with some laughter and a muffled conversation. It is like eavesdropping at a party or a club. This is another solid dance groove with a little piano (Mark Bosnian on keys) thrown in for good measure.

“Don’t Turn Back” closes the record with a bit more of a pop-rock sound to it. It is a nice change-up from the earlier tracks and shows the broader range of the Nu Shooz sound.

Until the digital music age, these tracks could only be found on rare vinyl or cassette copies. But, thanks to the band, Tha’s Right was released in a downloadable format in 2010. The album can be found on iTunes, on Amazon.com in their MP3 store, on emusic.com (which is where I got it from) or directly from the store on the band‘s website (see below for link).

Now, if they could just release the 1982 Can’t Turn It Off album via digital downloads, my Nu Shooz collection would be complete. Maybe some day…

You can find Nu Shooz online via Twitter (@NuShoozMusic) and at www.nushoozmusic.com which is their website.
Posted by Martin Maenza at 5:21 AM